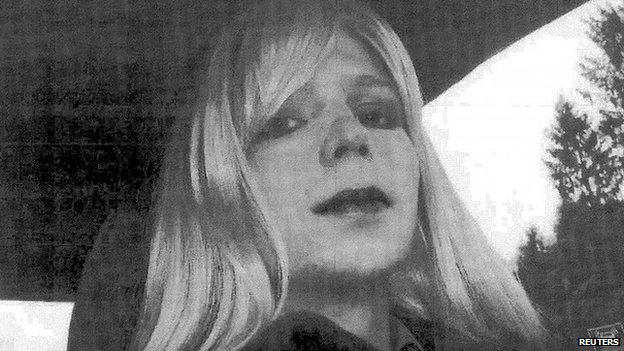 Pte Manning has been diagnosed with gender dysphoria, the feeling of one’s gender being at odds with the sex assigned at birth

A lawyer for convicted US document leaker Chelsea Manning has threatened to sue the Army if she is not given sex change therapy in military prison.

Nancy Hollander said the Army had an obligation to treat Pte First Class Manning for her “transgender issues”.

And she said Pte Manning would not be safe if transferred to a civilian prison for treatment there.

After her conviction last year, the former Army intelligence analyst announced she wanted to live as a woman.

In an interview with the BBC’s Rajini Vaidyanathan, Ms Hollander said Pte Manning was “doing well, as well as one can do with a long prison sentence”, and would be active in the appeal against her sentence.

But she said recent reports in the US media that military officials were considering transferring Pte Manning to a federal civilian prison for treatment of gender dysphoria was “not really a positive sign”.

“To some extent it’s a trick,” Ms Hollander said. “This was leaked information from someone at the Pentagon, which is of course ironic since I doubt anyone is going to be prosecuted for that leak, but Chelsea won’t be safe in a federal prison.”

She said that Pte Manning had not suffered harassment at the military prison at Fort Leavenworth, Kansas, even though her fellow inmates knew she was transgender.

Pte Manning has been diagnosed by military doctors with gender dysphoria, the sense of one’s gender being at odds with the sex assigned at birth.

Following her conviction in July on 20 charges in connection with the leaks of military and diplomatic documents, Pte Manning requested treatment including hormone therapy, and to be allowed to live as a woman.

Last month, a judge granted her petition to change her name legally from Bradley to Chelsea, and according to a court filing by Pte Manning’s legal time, a military doctor at Fort Leavenworth had approved a treatment plan by November 2013.

The US military is required to offer medical treatment to its soldiers, but Pentagon policy prohibits transgender people from serving in the military.

Pte Manning will not be discharged from the military until she has finished her prison term.

Defence Secretary Chuck Hagel has said the policy on transgender service members should be “continuously reviewed” but has not said whether he believes the policy should be overturned.

A recent study by the Palm Center estimated there were 15,000 transgender US military members and 130,000 veterans. 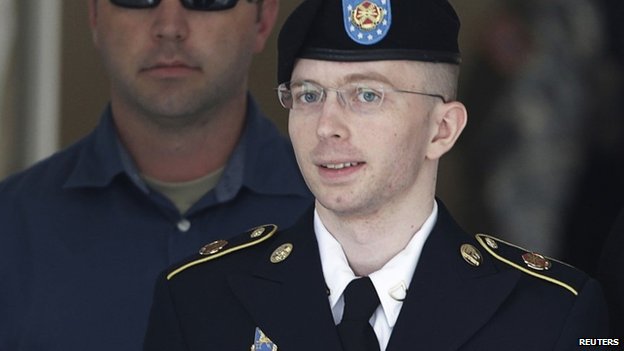 A recent appeal against Pte Chelsea Manning’s sentence was denied

“The government simply has to recognise this, to recognise there’s no reason why transgender people can’t serve in the military like anyone else,” Ms Hollander said.

She added that if military officials were not forthcoming with treatment, Pte Manning “may have to file a lawsuit to require the prison to provide the treatment it needs to provide”.

“It’s a cop-out by the military to say she has to move to a federal prison.”