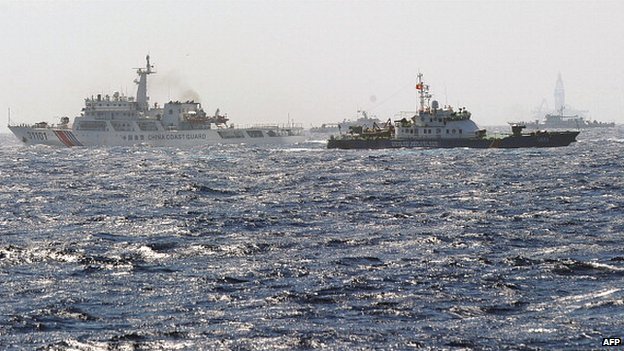 Chinese and Vietnamese coast guard ships are patrolling near the Haiyang Shiyou oil rig, seen to the rear

A Chinese ship rammed and sank a Vietnamese fishing boat near a controversial oil rig in the South China Sea, Vietnamese officials say, amid tensions between the two nations.

According to Vietnam’s coast guard, the boat was encircled by 40 Chinese vessels before it was attacked. All 10 fishermen onboard were rescued.

There was no immediate comment from China on the incident.

The two are locked in an intensifying dispute over South China Sea territory.

Vietnam has protested against China moving its Haiyang Shiyou 981 rig to waters also claimed by Hanoi, at a spot near the disputed Paracel Islands.

China’s refusal to move the rig sparked anti-China protests in Vietnam earlier in May, which left at least two people dead and several factories burnt.

Vietnamese legislators are preparing to sue China in an international court over the rig and other attacks on Vietnamese ships, according to local media.

The Chinese government has not yet commented on the latest South China Sea confrontation.

But state news agency Xinhua on Monday published a commentary in English which accused Vietnam of wanting to “disturb and play up the normal drilling of Haiyang Shiyou 981”.

Written by Chinese law professor Yang Zewei, the commentary states: “Hanoi should know that such drilling in the said area is China’s sovereign right endowed by the United Nations Convention on the Law of the Sea.”

“Vietnam should immediately stop any interruptive activities and undertake corresponding consequences and international responsibilities for its provocations.”.

Japan has urged for calm. Government spokesman Yoshihide Suga was reported by agencies as saying: “It’s important that relevant countries abstain from unilateral actions that raise tensions and that the countries act cool-headedly, observing international laws.”