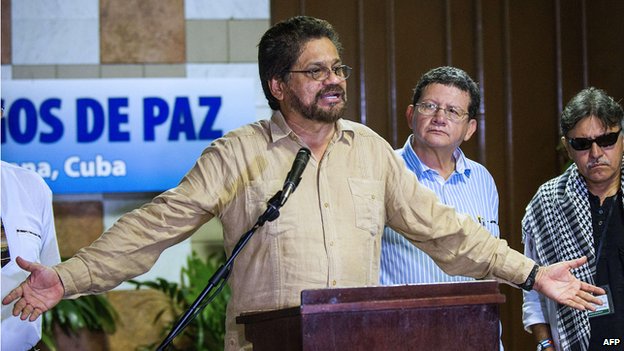 Colombia’s government and the Farc, the country’s largest rebel group, have agreed on a plan to deal with the illegal drug trade.

Both parties agreed to eliminate all illicit drug production in Colombia should a final deal be reached.

The Farc, which controls large patches of rural Colombia, is believed to be partly funded by money generated by the illegal drug trade.

This was the third on a six-point peace agenda being negotiated in Cuba.

The civil war in Colombia has killed an estimated 220,000 people in the last five decades.

As with previous agreements, details of the programme to combat the drug trade will need to be discussed further by special commissions.

Friday’s agreement marked the end of the last round of the talks initiated by President Juan Manuel Santos, who is seeking a second mandate in next week’s elections.

Earlier, the Farc along with the country’s second largest armed group, ELN, said they would observe a unilateral cease fire for the voting. 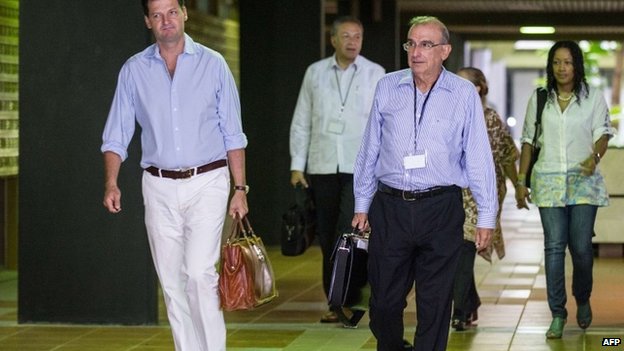 Mr de la Calle (R), the head of the Colombian delegation said the deal was a “fundamental step”

At a news conference in the Cuban capital, Havana, the Colombian chief negotiator, former vice-President Humberto de la Calle, said the deal was a “fundamental step” towards peace.

“This way we eliminate the petrol that has fuelled the conflict in Colombia for decades,” he said.

As part of the deal , both parties also agreed on a programme to clear rural areas of land mines.

The Farc negotiator Ivan Marquez said the left-wing rebels insisted on addressing the consequences of the aerial spraying of coca plantations, including reparations for those affected.

The talks in the Cuban capital, Havana, are the fourth attempt since the 1980s to reach peace.

The conflict – the longest-running in Latin America – has killed an estimated 220,000 people since it began in the 1960s, with some three million more internally displaced by the fighting.