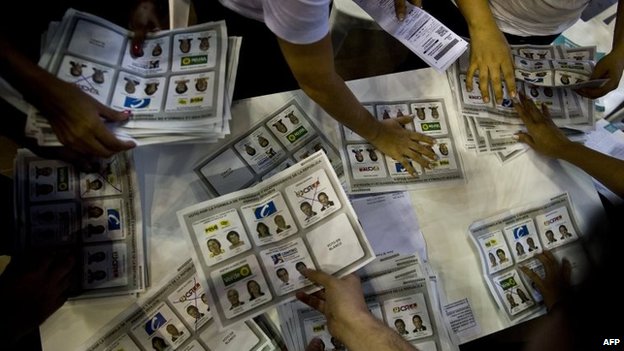 Abstentionism was particularly high in the presidential election

Colombian ex-finance minister Oscar Ivan Zuluaga has won the first round of the presidential election, ahead of incumbent President Juan Manuel Santos.

Both fell far short of the 50% plus one needed to avoid a second round and will now face each other again on 15 June.

The election could decide whether peace talks with Farc rebels will continue.

The other three candidates trailed at least 10 percentage points behind.

The policies of the two leading candidates differ little except for their stance on the peace process with Colombia’s largest left-wing rebel group, the Revolutionary Armed Forces of Colombia (Farc).

Mr Santos – who initiated the negotiations that formally started 18 months ago in the Cuban capital, Havana – says he hopes to sign a deal with the Farc before the end of the year.

But Mr Zuluaga has been critical of the talks, accusing President Santos of being soft on the rebels.

“We cannot allow the Farc to attempt to command the country from Havana,” he told his supporters.

A president “cannot and should not be manipulated by the Farc”, he said. 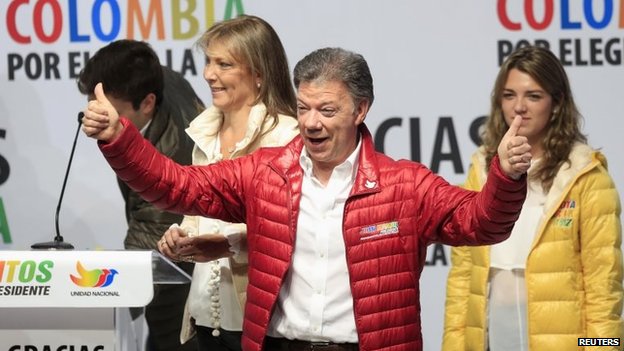 President Santos says he is “going to win with peace”

President Santos said that on 15 June, Colombians would have to choose “between those who want an end to the war and those who prefer a war without end”.

Who the losing candidates’ voters now back may well determine the second-round winner, analysts say.

Clara Lopez is a firm supporter of the peace process, while Ms Ramirez has said that she is against an amnesty for Farc rebels and does not want to see “the Farc criminals” becoming legislators. 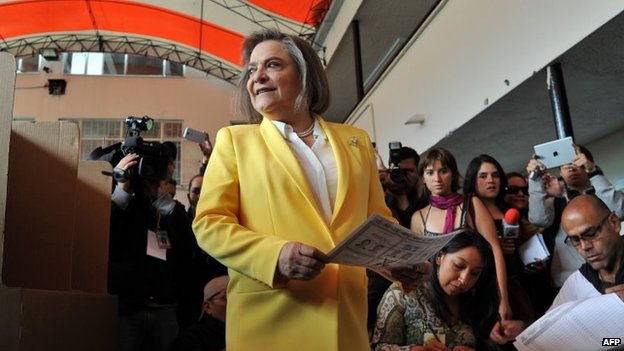 Both President Santos and Mr Zuluaga will also try to galvanise some of the 60% of eligible voters who abstained, the highest rate in the past two decades.

More than 220,000 people are estimated to have died in Colombia’s five-decade-long armed conflict and many Colombians are getting increasingly impatient with the pace of the peace talks.

So far, negotiators have achieved agreement on three key issues: land reform, political participation of the rebels and illicit drugs.

They have yet to discuss disarmament, victims’ rights and the eventual implementation of the peace deal.

Defence Minister Juan Carlos Pinzon said it had been “the safest election day in recent history”, helped by the fact that both the Farc, and Colombia’s second largest rebel group, the ELN, had declared a temporary ceasefire.