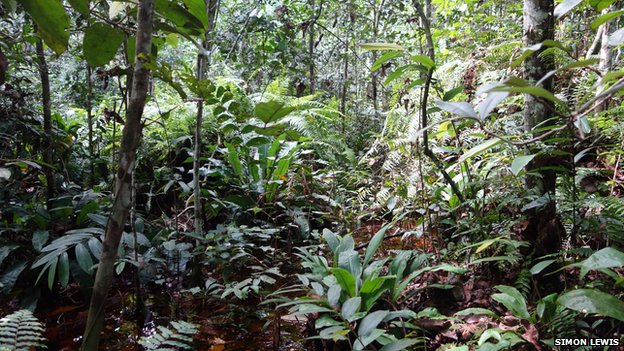 A vast peatland has been discovered in a remote part of Congo-Brazzaville.

The bog covers an area the size of England and is thought to contain billions of tonnes of peat.

Scientists say investigating the carbon-rich material could shed light on 10,000 years of environmental change in this little-studied region.

Dr Simon Lewis, from the University of Leeds, said: “It’s remarkable that there are parts of the planet that are still uncharted territory.”

He added: “Few people venture into these swamps as they are quite difficult places to move around in and work in.”

Satellite images initially hinted at the presence of the enormous tropical peatland, but an expedition, starting from Itanga village in April, confirmed it was there. 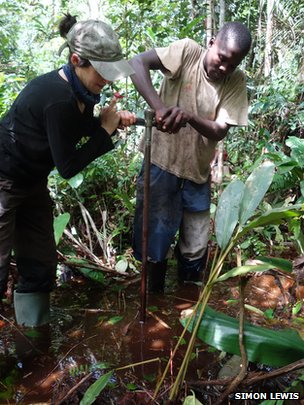 The discovery team, from the University of Leeds, the Wildlife Conservation Society-Congo and Congo-Brazzaville’s Marien Ngouabi University, had to contend with dwarf crocodiles, gorillas and elephants as they explored the area. But they said the biggest challenge was soggy feet.

Dr Lewis, who was working with PhD student Greta Dargie, added: “You can only walk on these areas for a couple of months a year, right at the end of the dry season, so you have to time it right. Even then it is still wet every day.

“We were inside the swamp for three weeks, and the only time we had dry feet was when we were asleep in our tents. To place the tent, you have to build a platform because the ground is permanently water-logged.”

The researchers believe it holds billions of tonnes of partially decayed vegetation.

“Peatlands are formed because the plant matter going into the soil is not fully decomposed,” Dr Lewis explained.

“It requires slow conditions for the decomposition, so you naturally find most peatlands are in the cold zones. It’s rare to find them in the wet and warm tropics, so that makes this an unusual discovery.” 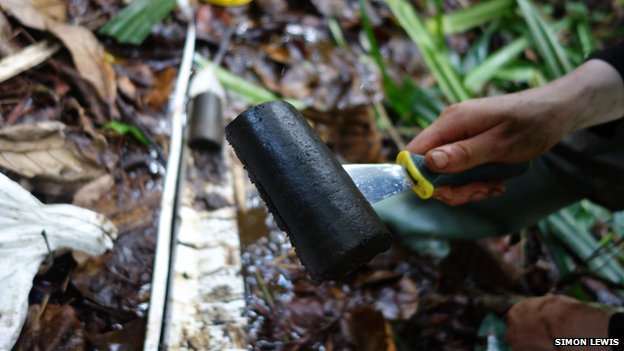 Because the area holds so much organic matter it means a large amount of carbon is locked into the ground.

The scientists say analysing this material, which is thousands of years old, will help them to learn more about the Congo Basin’s role in the world’s past and present climate. 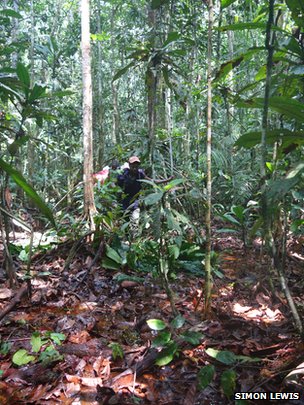 Dr Lewis said: “Peatlands, generally, have been a big carbon sink over the past 10,000 years. They have been taking carbon out of the atmosphere and storing it as peat for the long term.

“And what we’ve found in central Africa is another one of those areas, so it adds a little piece to that jigsaw puzzle of where all the carbon goes in the atmosphere, where the sources are and where the sinks are, particularly in the pre-industrial era.

“So we can reduce our uncertainty around the global carbon cycle before humans started changing it.”

The scientists have taken samples of the peat back to the UK to confirm its age and analyse the vegetation that it holds.

While some peat bogs around the world are under threat, particularly from drainage to make way for agriculture, the team thinks the Congo peatland is safe for now.

Dr Lewis said: “It’s remoteness naturally provides protection. And much of the area in the Republic of Congo is already a community reserve: it is managed by the Wildlife Conservation Society, the government and the local people. They have a management plan to manage the area and also increase their livelihoods and incomes.”