Communities around Wales are preparing to welcome the Queen’s baton as it arrives ahead of the Commonwealth Games.

Sporting heroes, TV stars and pillars of the community are among 177 people carrying the baton in a relay around the country.

It will travel 731 miles (1,176km) in Wales visiting sights such as Snowdon’s summit and Dylan Thomas’s boathouse.

The baton touches down at Cardiff Airport on Saturday morning.

The Queen’s Baton Relay is the curtain raiser to the 2014 Commonwealth Games in Glasgow which start on 23 July.

The baton has been travelling around 71 nations and territories across the world since October last year and will be in Wales until 30 May.

In Wales, BBC presenter Alex Jones, former athlete Iwan Thomas and a survivor of a 1960 mining disaster will be part of the relay.

The relay – similar to the Olympic torch event – was first introduced at the British Empire and Commonwealth Games in Cardiff in 1958 and has taken place in some form ever since.

Following the success of the Olympic torch relay before London 2012, thousands of people are expected to greet the baton in Wales.

After arriving in Wales on Saturday morning, it will visit the south Wales valleys taking in Ebbw Vale and Tredegar in Blaenau Gwent, and Merthyr Tydfil.

One of the first people to carry it in Wales will be 82-year-old former miner Joseph Price, from Abertillery, a survivor of the Six Bells mining disaster in Monmouthshire in 1960 who helped rescue those trapped underground.

In Merthyr, members of the family of Welsh world champion boxer Howard Winstone, who won gold at the 1958 Games in Cardiff, will be involved in the relay.

The baton moves on to Rhondda Cynon Taf on Sunday where 74-year-old Norman Richards will take it in Aberdare, some 56 years since he first carried it during the ground-breaking baton relay before the Cardiff Games. 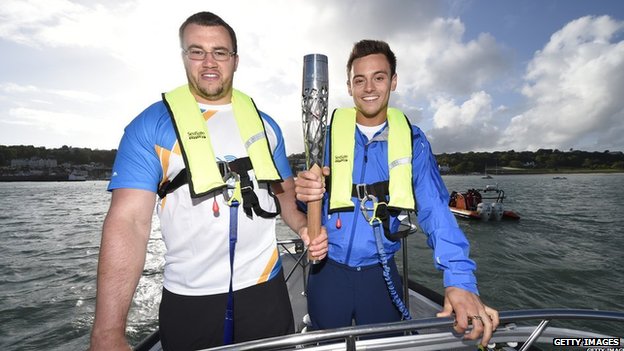 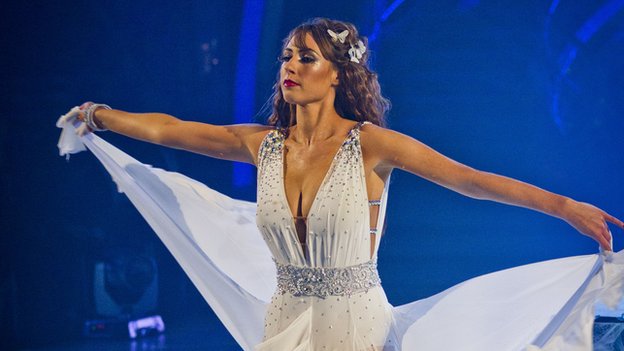 TV presenter Alex Jones, who has competed in Strictly Come Dancing, will carry the baton

It then spends the day at the Urdd Eisteddfod in Bala, Gwynedd, where Olympic and Commonwealth Games medallist Thomas features, before it heads to south west Wales. At Laugharne in Carmarthenshire the baton will visit Dylan Thomas’s boathouse, one of many events to mark 100 years since the poet’s birth.

On Wednesday one of the highlights will be when the baton is blessed by the Bishop of St Davids, the Right Reverend Wyn Evans, in the grounds of St Davids Cathedral in Pembrokeshire before a visit to Machynlleth in Powys.

It will also travel up the Menai Strait by boat with The One Show presenter Jones and take part in a cycling relay with former British Cycling chief Sir Dave Brailsford, who grew up in Deiniolen, Gwynedd. 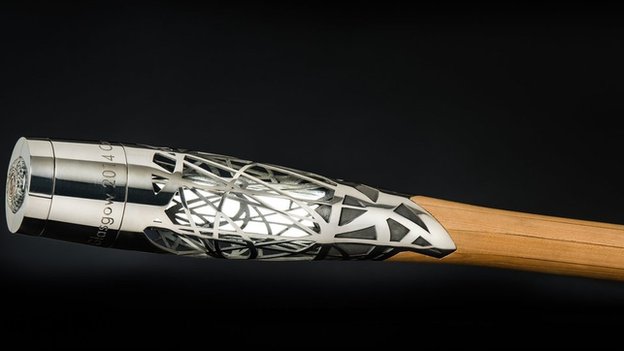 The baton for Glasgow 2014 will tour Wales until 30 May 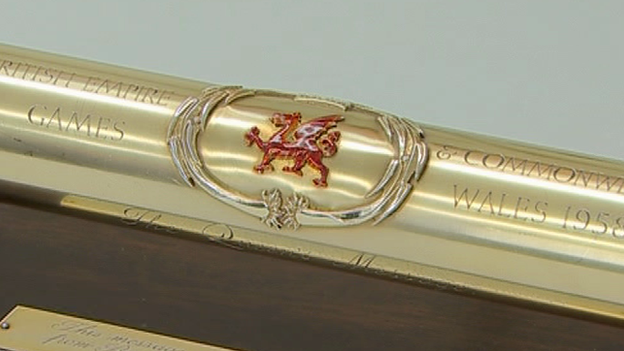 The 1958 Games in Cardiff saw the first baton relay

The baton’s trip around Wales finishes on Friday in north east Wales where it heads to Rhyl, Moel Famau, Ruthin and, lastly, Llandegla.

Chris Jenkins, chief executive of the Commonwealth Games Council for Wales, said organisers realised the relay presented a fantastic opportunity for the country and its Games team.

“It’s got seven days here, a Bank Holiday, it’s just before the Games and we thought we could go to smaller places and many of them,” he said.

“The anchor was the Bank Holiday Monday at the Urdd Eisteddfod.

“We also wanted to take it to some iconic places like Laugharne for the Dylan Thomas anniversary, and we wanted to do something in Snowdonia.”

THE BATON IN WALES

• The baton is spending seven days in Wales

• The baton passes through 11 of Wales’ 22 local authorities

• It will travel by air, boat, bike, car and train

He said it was hard to gauge how many people would greet the relay but, judging from the publicity and response so far, he expected it to be “fantastic”.

“On one day people are coming over from Canada to see a member of their family carry the baton in Aberdare,” he added.

“I hope people will come out and cheer everybody on.”

He said organisers wanted to use the baton relay to build support for the Wales team.

The relay for the Glasgow Games was started by the Queen at Buckingham Palace back in October last year.

The baton contains a message from the Queen which will be revealed at the opening ceremony in Glasgow on 23 July.