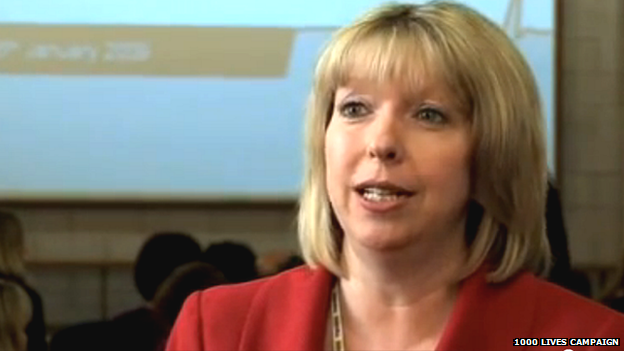 Opposition parties have raised concerns after the former nursing director at a troubled health board was made an adviser on NHS care standards in Wales.

Victoria Franklin was ABMU’s director of nursing until last summer, but had left her role before the review began.

She was responsible for ABMU’s nurses but not general standards of care.

The investigation that led to the report, Trusted to care, was ordered by Health Minister Mark Drakeford after concerns emerged from families of patients treated at Neath Port Talbot and the Princess of Wales hospitals over the last few years.

The report did not refer to Ms Franklin individually, but made general criticism of the health board.

It described “a sense of hopelessness” in its care for frail and elderly patients; found “poor professional behaviour” and a “lack of suitably qualified, educated and motivated staff”.

Last year, three nurses from the Princess of Wales Hospital were arrested and bailed on suspicion of neglect after claims notes had been falsified.

A further seven have been suspended from duty and investigations continue.

That review was in response to the findings of the Francis Inquiry into poor care at the Mid Staffordshire NHS Foundation Trust.

The board set up to establish the new standards is chaired by Chief Nursing Officer Prof Jean White and Ms Franklin is the project manager.

In a subsequent letter to Shadow Health Minister Darren Millar, Mr Drakeford described Ms Franklin as a “highly experienced health professional whose expertise is being utilised to support the review of the healthcare standards for Wales”.

“Either they [the Welsh government] did not know what was going on in Neath Port Talbot hospital and Bridgend hospital or they did know, they had concerns about the quality of nursing care, and yet despite that they took the person responsible for that at board level and they gave them a more senior job within Welsh government,” she said.

Mr Millar also questioned the decision: “The Welsh government have told us that they had concerns about care standards and nursing standards in the Princess of Wales Hospital and elsewhere within the ABMU health board area for some time.

“To then appoint somebody who was directly responsible for nursing care standards throughout that health board area seemed to be a very premature decision.”

The Welsh government said: “We do not comment on staffing matters.

“As the Trusted to care report says ‘the collective responsibility of those inside the system, those charged with regulation and the public should be not be to catch out and blame, but to identify, correct, prevent and resolve issues constructively, so that the way hospitals work and services are provided improves’.

“Our focus is ensuring that the standards we demand of our health service are being delivered, including immediate checks and assurances patient care is not being compromised.”