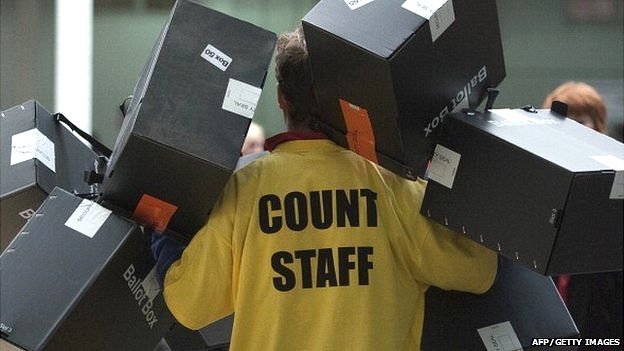 The votes can be counted but not declared before 22:00 BST, when all polls have closed across the EU

Counting of the votes to decide which four politicians will represent Wales in the European Parliament is taking place this evening.

Thirty two per cent of those eligible to vote in Wales cast their ballot last Thursday.

The best turnout was Anglesey, with 38%, and the lowest Blaenau Gwent and Merthyr Tydfil, with 27%.

In 2009 the Conservatives, Labour, Plaid Cymru and UKIP each had a Welsh MEP elected. The Tories led the poll.

The votes are being counted in each of the 22 local authority areas in Wales and the results passed on to the regional returning officer for Wales.

Bryn Parry Jones will declare the victors at Fishguard Leisure Centre. and the result is expected some time after midnight.