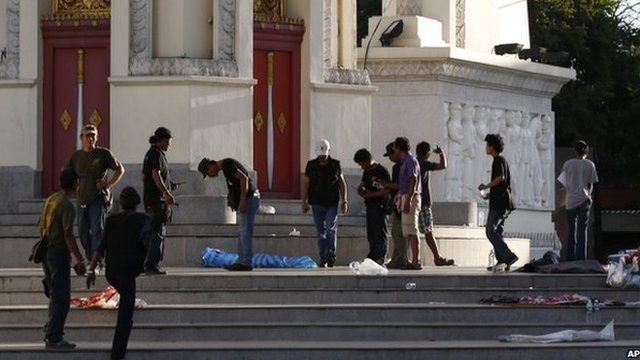 “There are plenty of soldiers posted near this, the main protest camp, but they could not prevent” the attack, reports Jonathan Head

Three people have been killed and more than 20 others injured in an attack on an anti-government protest camp in the Thai capital, officials say.

Witnesses reported explosions and gunfire early on Thursday at a protest camp at Bangkok’s Democracy Monument.

Protesters have been pressing the Senate to replace the cabinet with an appointed administration.

On Thursday, Thailand’s military chief warned that the army could “use force” if political violence continued.

“If violence continues the military may need to come out… to restore peace and order,” General Prayuth Chan-ocha said in a statement, adding that the army could be forced to end the violence “in full force”.

Thailand has suffered months of deadlock since the protest campaign began in November, with at least 27 people killed and hundreds wounded. 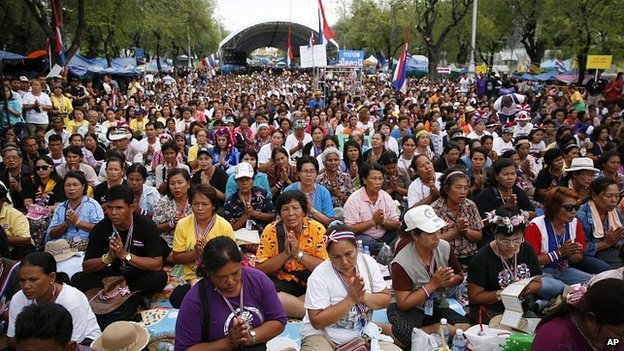 Protesters have been trying to oust the government since November 2013 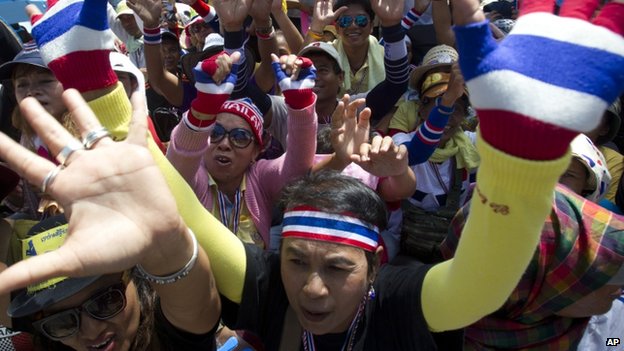 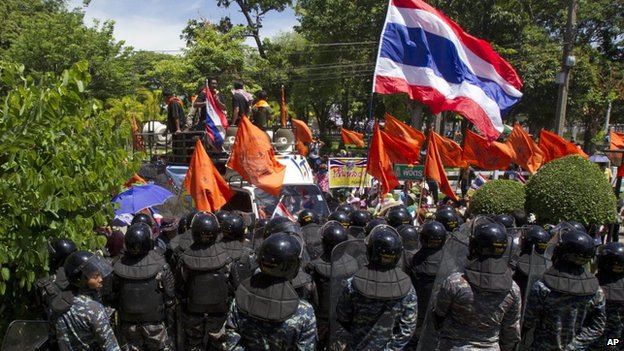 Also on Thursday, protesters forced a meeting between the government and the Election Commission to be abandoned.

A crowd led by Suthep Thaugsuban, head of the anti-government movement, broke into the Air Force base where the meeting between acting Prime Minister Niwatthamrong Boonsongphaisan and the commission was being held.

“The meeting is over, the prime minister is leaving. We cannot continue today,” a member of the commission was quoted by Reuters news agency as saying.

The Election Commission on Thursday has called for polls to be postponed due to the political unrest, AFP news agency says, citing officials.

Reports said grenades were thrown in the latest attack in the early hours of Thursday, followed by gunfire. A doctor at an emergency centre in Bangkok said the wounded had been hit by shrapnel.

Police identified two of the victims as a protester who was asleep and a protest guard who was shot.

There have been a number of attacks on the protest movement since it began its street campaign against the government last year, says the BBC’s South East Asia correspondent Jonathan Head, but this was on a larger scale than usual.

No group has said it carried out the attack but both pro- and anti-government groups are known to have armed hardliners. 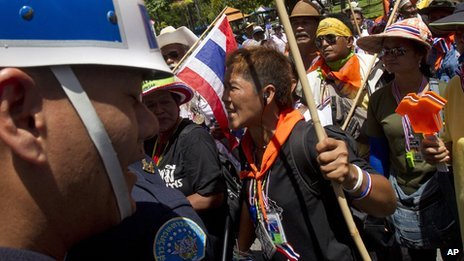 The attack on protesters comes days after former Prime Minister Yingluck Shinawatra was removed by a Thai court.

Ms Yingluck was swiftly replaced by former Commerce Minister Niwattumrong Boonsongpaisan, who is from her ruling Pheu Thai party.

The party, which won elections in July 2011, says it will push on with a plan to hold another general election in July.

The protesters say they will obstruct this poll in the same way that they blocked an election held in February that was subsequently annulled by the courts.

Thailand has been in the grip of a power struggle since Ms Yingluck’s brother, Thaksin Shinawatra, was ousted by the military as prime minister in a 2006 coup.

Mr Thaksin and his family are hated by an urban and middle-class elite who accuse them of corruption and abuse of power.

But Mr Thaksin’s policies won him huge support in rural areas, and both the elections since the coup have returned Thaksin-allied governments to power.

The current anti-government protesters want to replace Ms Yingluck’s administration with an unelected “people’s council” which, they say, would reform the political system.

Both pro- and anti-government groups have held rallies in Bangkok in recent days, raising fears of further violence.