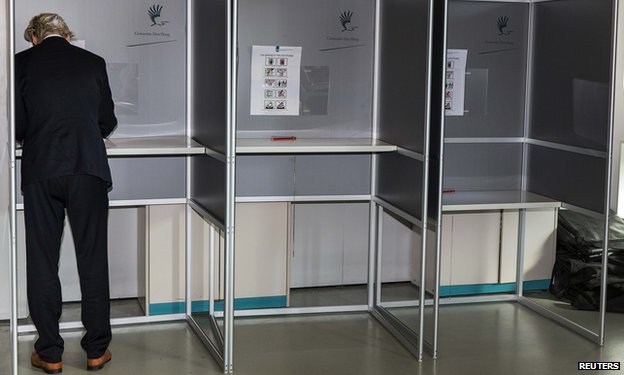 Voters are casting their ballots in the UK and Netherlands – the start of four days of voting in EU-wide European Parliament elections.

There will be no official results anywhere in the EU until 23:00 in Brussels (2100 GMT) on Sunday.

The vote will decide who occupies 751 seats in the parliament. Most of the 28 member states will vote on Sunday.

The vote will affect the lives of the EU’s 500 million citizens. The European Parliament has much more power now than it used to have. It is a co-legislator, with the EU government ministers, in most policy areas.

Voters are also electing local council officials in England and Northern Ireland. It is the final big test of public opinion before the UK’s general election next year.

In the new European Parliament – the EU’s only directly elected body – the UK will have 73 seats, the Netherlands 26.

You can follow full coverage with all the latest updates at bbc.co.uk/vote2014.

The seats are allocated in proportion to a country’s population.

Results for the local elections will come on Friday in the UK.