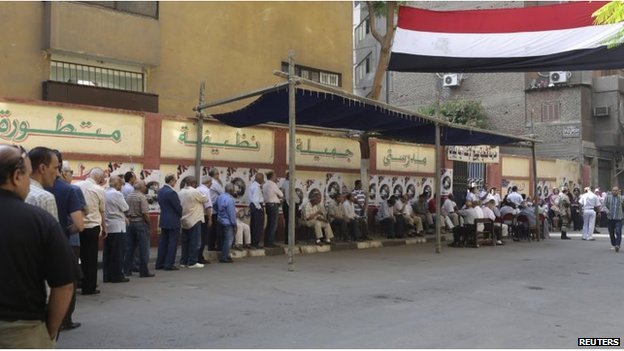 Millions of voters are casting ballots across Egypt to choose a new president, for the second time in two years.

A huge security operation has been mounted by police and the military, amid fear of attacks by militants seeking to disrupt the polls.

Mr Sisi is forecast to win by a comfortable margin.

The elections are being held across two days, with the official result to be announced on 5 June.

Shortly after polls opened, Mr Sisi cast his vote at a polling station in Cairo amid a throng of reporters and spectators.

The 59-year-old appeals to Egyptians who crave stability after years of political upheaval and anything else than an easy win for him would be a source of astonishment, says the BBC’s Kevin Connolly in Cairo.

President Morsi was deposed last July following mass protests and he is standing trial on a raft of charges. He strongly denies any wrongdoing.

Egypt’s interim authorities have since clamped down hard on Mr Morsi’s Islamist movement, the Muslim Brotherhood, declaring it a terrorist organisation.

More than 1,400 people have been killed and at least 16,000 arrested, including the Brotherhood’s senior leaders.

Islamists and some secular activists are boycotting the polls in protest at the clampdown and repression of dissent.

Nearly 200,000 members of the security forces are on duty at polling stations across the country. The tight security drums home a familiar message from Egypt’s military-backed interim authorities – that the dangers of Islamist militants are ever present, our correspondent says.

In his election campaign, Mr Sisi has set out plans to develop agriculture, housing, education, impoverished areas and employment.

He is backed by several big businessmen as well as a broad range of political parties from the Islamist right to the moderate left.

Hamdeen Sabahi, who came third in presidential elections in 2012, offers an alternative to young voters who favour a civilian candidate over a former military one.

He promises to combat corruption and incompetence while promoting civil rights.

Both candidates say they will not re-legalise the Muslim Brotherhood.