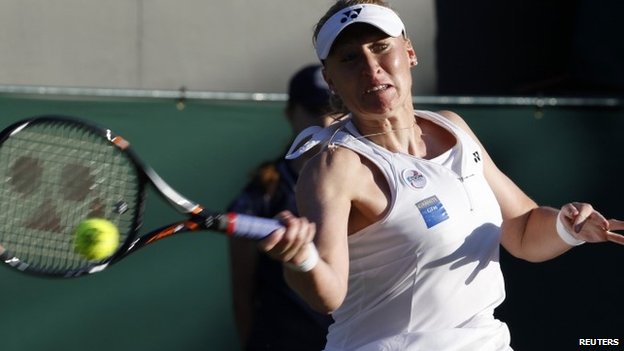 Elena Baltacha revealed she had liver cancer in March

A private funeral is to be held later for Elena Baltacha, the former British tennis number one, who died of liver cancer aged 30.

Ms Baltacha was diagnosed with the illness in January, two months after retiring from tennis and weeks after marrying her coach Nino Severino.

The funeral will be held at St Johns Church in Ipswich.

Her father Sergei played football for Ipswich and the family settled in the town where she ran her tennis academy.

The family have asked that instead of flowers, donations be made to the Rally For Bally fund.

The money will be split equally between the Royal Marsden Cancer Charity and the Elena Baltacha Academy of tennis, which she set up to help disadvantaged children take up the sport.

Ms Baltacha’s highest singles world ranking was 49, which she reached in September 2010.

She was diagnosed with a liver condition at the age of 19 and managed the disease throughout her career with medication and blood tests.

Despite the disruption the illness caused, she won 11 singles titles, made the third round of Wimbledon in 2002 and reached the same stage of the Australian Open in 2005 and 2010.