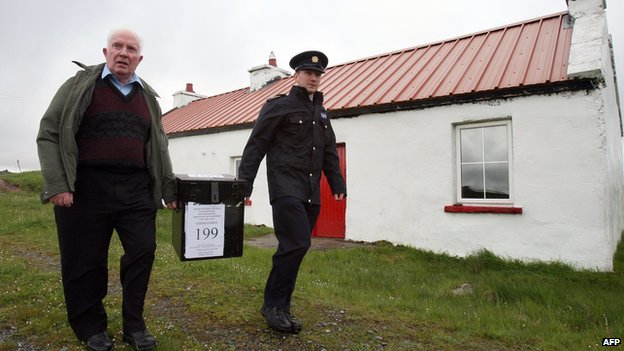 Voters in Ireland and the Czech Republic have been voting on the second day of European elections.

In the European Parliament 11 seats go to MEPs from the Republic of Ireland, while the Czech Republic gets 21 seats. The Czechs will also vote on Saturday.

The UK and the Netherlands held their elections on Thursday.

There will be no official results anywhere in the EU until 23:00 in Brussels (21:00 GMT) on Sunday. Most EU countries will vote on Sunday.

The vote will affect the lives of the EU’s 500 million citizens, and the chamber has much more power than it used to.

It is a co-legislator, with government ministers from the EU’s 28 member states, in most policy areas.

You can follow full coverage with all the latest updates at bbc.co.uk/vote2014.

The seats are allocated in proportion to a country’s population.

In December Ireland officially exited its EU/IMF bailout programme, having fulfilled its conditions – the first bailed-out eurozone country to do so.

The Czech Republic, not yet in the euro, is treaty-bound to join the single currency when its economic conditions converge with the eurozone’s.