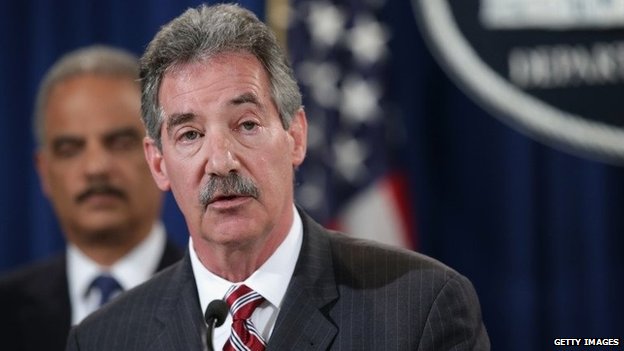 US federal law enforcement agents have been ordered to record interviews with suspects, in a reversal of a decades-old justice department policy.

Previously, agents with the FBI and other federal agencies were forbidden from recording interrogations without special dispensation.

Critics of the old policy said it risked generating false confessions and other abuses.

The change was first reported by the Arizona Republic newspaper.

The policy, due to take effect in July, will cover agents at the FBI, the Drug Enforcement Administration (DEA), the Bureau of Alcohol, Tobacco, Firearms and Explosives (ATF) and the US Marshals service.

Under the new rules, agents may take audio or video recordings but the latter will be “strongly encouraged”, the justice department memo authored by Deputy Attorney General James Cole states.

You’ll often hear a criminal defendant say ‘I never said that’ but how can you prove that?”

Valerie Newman, a lawyer and law professor who served on a Michigan task force on the issue, told the BBC the policy shift brings the US federal government in line with the states, whose police are already required to record interrogations.

“Now you have transparency, so it’s not one person’s word against another’s,” she said.

Under the current policy, federal agents conducting an interview take handwritten notes and then produce a report summarising the conversation.

Critics have charged that process unfairly works against a defendant in court, especially when the suspect’s recollection of the interview differs from that of the agent.

“You’ll often hear a criminal defendant say, ‘I never said that.’ But how can you prove that?” Ms Newman said.

Former US Attorney for Arizona Paul Charlton said he was fired in a 2006 purge at the justice department in part because he pushed back against the policy of not recording interrogations.

“We were losing cases and pleaded cases to a lower offence when we ought have won those cases,” because of the policy, he said.

Mr Charlton had jurisdiction over violent crimes normally considered in state criminal courts, because of 21 Indian reservations in his district.

He said the lack of recorded confessions did “great harm” to his prosecutions, especially in child sex abuse cases.

While the justice department has refused to release its policy on recording of suspect interviews, the New York Times has published a 2006 FBI document stating that jurors might not understand the legally permissible tactics agents use to obtain information – and could find them distasteful.

The bureau has also said recording devices might intimidate suspects into silence.

Exceptions to the new policy include when the interviewee refuses to be recorded, national security or public safety situations, or when it is not feasible.

The policy shift will not apply to interviews conducted outside the US, though the memo notes recording “may be appropriate” in that circumstance.