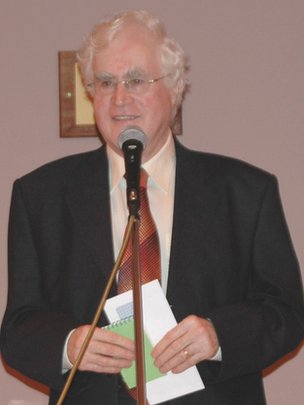 Rev Tom Sinclair was hit by a car on Waverley Bridge

A minister attending the General Assembly in Edinburgh has been named as the man who was knocked down and killed on Waverley Bridge.

The Reverend Tom Sinclair, 76, was on Waverley Bridge walking across the entrance road to Waverley Station, when he was hit by a car.

The incident happened when the Assembly finished for the day, just after 17:00.

He said: “The news of Tom’s death in such tragic circumstances came as a terrible shock to the General Assembly.

“Tom Sinclair loved the Church of Scotland and loved the General Assembly. We mourn his loss and we commend his wife and family to the care of the community of faith and to the grace God.

“Tom’s death is a painful tragedy for his wife and family and will come as real blow to the Presbytery of Lewis, which he was still serving as presbytery clerk.”

Mr Sinclair, originally from Glasgow, was clerk to the Presbytery of Lewis for more than 30 years.

He is survived by his wife Pam and son Jonathan, 43 who lives in Edinburgh.

Mr Sinclair entered the ministry after studying at Trinity College in Glasgow.

He did his probation in Aberdeen Holburn Central. His first parish was Scourie in Sutherland, now known as Eddrachillis.

He later moved to Martin’s Memorial, Stornoway, in the 1970s where he served for almost 30 years.

He had been a commissioner at the General Assembly this week.

Rev Hugh M Stewart, of Lochs-in-Bernera linked with Uig Church of Scotland, expressed his “shock” at the death of the “well-known and well-loved figure”.

“He was a gentle, caring and incisive person. He was well loved for the amiable and jolly manner in which he carried out his duties,” he said.

“Of particular interest to Tom was the care of those with special needs, who were always at the centre of his life and work in the community.

“He will be remembered with great affection and thankfulness for the contribution he made not only to the Church of Scotland but also to the wider communities of the Western Isles.”