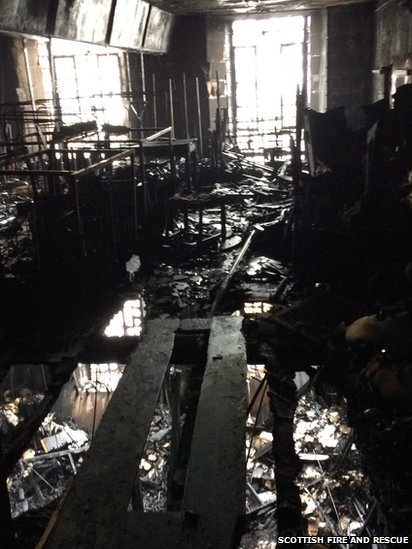 The library was completely destroyed in the blaze

The iconic library at Glasgow School of Art has been lost in the fire which swept through the Charles Rennie Mackintosh building on Friday.

The library was recognised as being one of the finest examples of art nouveau in the world.

Broadcaster Muriel Gray, who is the art school’s chairwoman, said: “This is an enormous blow and we are understandably devastated.”

However, she revealed that the art school’s archives were safe.

Ms Gray, a former student at the school, confirmed that most of the building was still standing.

“The most amazing, almost miraculous news is that the majority of the building is still intact,” she said.

“Due to one of the most astonishingly intelligent and professional pieces of strategy by the fire services, they succeeded in protecting the vast majority of the building, apparently by forming a human wall of firefighters up the west end of the main staircase and containing the fire.”

She added: “Also, after ensuring no lives were in peril, they displayed an impressive understanding of the precious nature of the building, and due to their careful and meticulous handling of each developing situation the damage is considerably less than we dreaded.

“We have run out of words with which to thank them, but the school has most certainly gained a new gallery of heroes.” 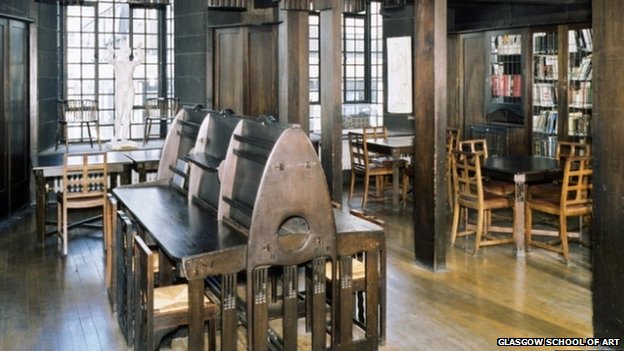 Ms Gray, who had burst into tears when she saw the building on fire, also confirmed that many students had lost some, or all, of their work, but other work had been preserved.

She said curators and academic staff were hoping to be allowed into the building in the next few days to assess what could be salvaged.

“The joy that our archives are safe combines with the delight in seeing most of our beloved building bruised and battered, but most certainly not destroyed,” she added.

Speaking about the loss of the library, Ms Gray said: “Mackintosh was not famous for working in precious materials. It was his vision that was precious and we are confident that we can recreate what was lost as faithfully as possible. 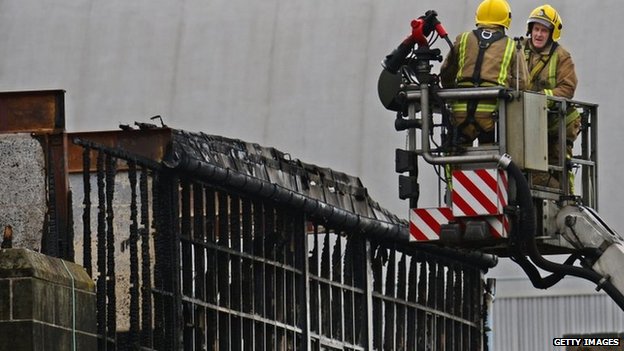 “Our main concern right now is the welfare of the students and the impending graduation and everyone is working hard together to achieve the best outcome for all.”

The Scottish Fire and Rescue Service said more than 90% of the structure was viable and they had protected up to 70% of the contents.

The fire service has yet to confirm the cause of the blaze, which some students have suggested could have started in the basement when a spark from a projector caught a piece of foam.

The UK government has said it would make a significant contribution towards the costs of restoring the building. 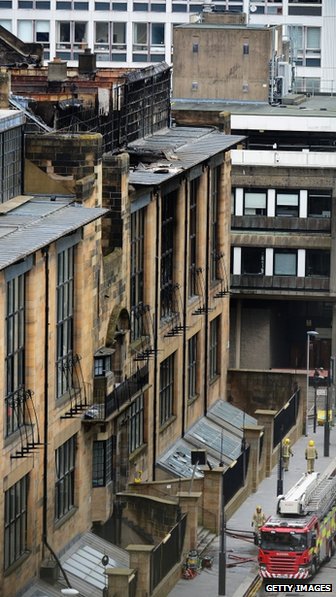 Chief Secretary to the Treasury Danny Alexander said it would contribute “in the millions, if necessary” to restore a “priceless gem”.

Mr Alexander, who was visiting the site on Saturday afternoon, said: “We’ve seen the appalling damage to the Glasgow School of Art. It’s a hugely important building not just for Glasgow and Scotland but for the whole of the United Kingdom.

“The UK government will be willing to make a significant financial contribution towards the cost of rebuilding.

“Obviously at the moment we don’t know the precise extent of the damage or what the costs will be, so I can’t put a figure on it, but the chancellor and I have spoken this morning and we both think it is appropriate.”

He added: “This is going to be a costly business but it’s a very important landmark for the whole of the UK so we stand ready to provide an appropriate share of the funds that will be necessary to bring this hugely important building back to life.”

“We are all thankful that no-one has been hurt and for the heroic efforts of firefighters to safely evacuate the site and save the building and as much as possible of the work it contains.

“I know from speaking to Professor Tom Inns [director] that GSA is determined that the school will recover, and rebuild and renew the Mackintosh building and what it stands for.

“He can count on support from friends of the GSA in Scotland and around the world, including the Scottish government.

“We have already invested heavily in the School in recent years, contributing around £55m to the new Reid building and to conservation of the Mackintosh building. 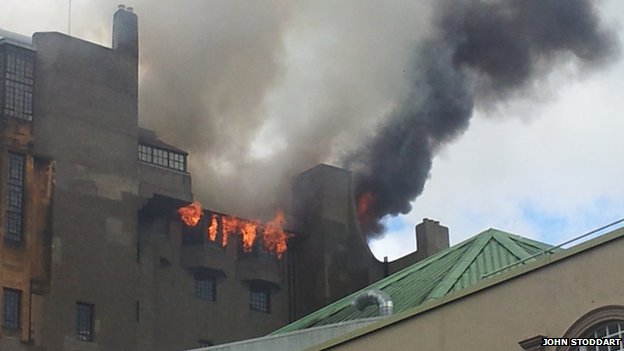 “We know the restoration will run into millions of pounds, and we are committed to strongly supporting the funding effort required.”

She added that the Scottish Cabinet would discuss the issue on Tuesday and would then make an announcement on the restoration plans.”

An ecumenical church service was held at Renfield St Stephens in Bath Street for those affected by the fire.

Fire broke out at the listed building at about 12:30 on Friday.

Eyewitnesses said the fire appeared to have started when a projector exploded in the basement of the building on Renfrew Street in the city centre. 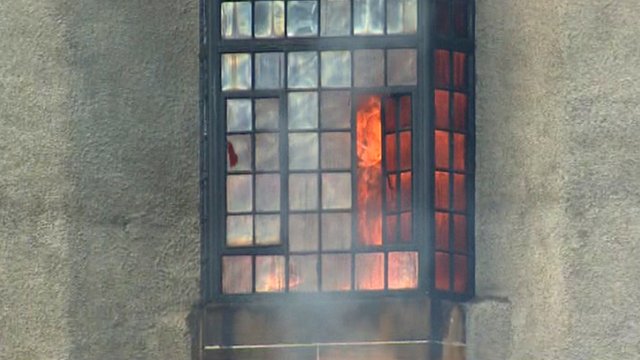 Chief Fire Officer Alasdair Hay: “We took a roll call and we are as confident as we can be that nobody has been injured in this fire”

Everyone who had been in the packed building was said to have escaped safely.

Final year students had been preparing for their end-of-year degree show in the building when the blaze broke out.

The main fire was extinguished by about 17:00.

The Mackintosh building, completed in 1909, is “unique” in that it is a working art school as well as a work of art. 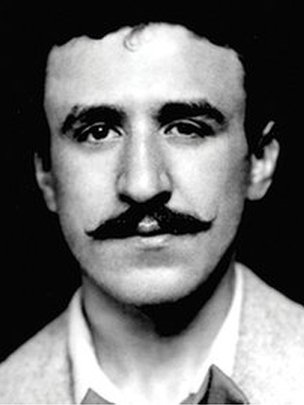 It has an A list rating, meaning it has been classified by Historic Scotland for its age and rarity.

From the facade to the fixtures and fittings every detail shows the craft of Charles Rennie Mackintosh, Scotland’s most-lauded designer.

In a statement issued at 21:30, Assistant Chief Officer Dave Boyle said crews had been working “absolutely flat out” in an effort to save “this treasured building and many of the items it housed”.

He said: “While the priority from the outset was to save life we have also been working closely with Glasgow School of Art staff to ensure firefighters conducted an effective salvage operation.

“We are of course very conscious the Mackintosh is a world-renowned building that is a key feature of this great city, and that the artworks it stores are not only valuable but also cherished.”

ACO Boyle added: “We are acutely aware this period is the culmination of years of endeavour for students and that their irreplaceable work is inside the Mackintosh.

“Work to save everything that can be saved is ongoing and we will continue to work closely with GSA staff and students throughout this operation.” 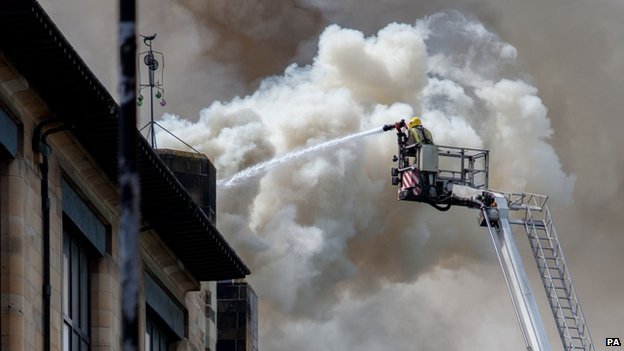 Fire crews arrived on the scene within four minutes of the alarm being raised.

Search and rescue teams led a number of people to safety. There were no reports of any casualties.

Police cordoned off Renfrew Street, and smoke was also drifting across the M8. Large crowds of students and onlookers gathered near the scene, with several people in tears as they watched the events unfold. 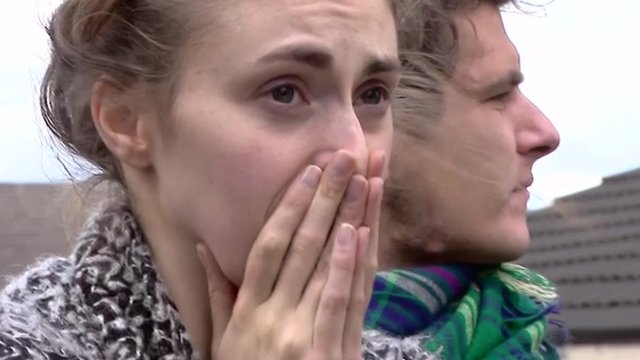 Austin Yuill, who works as a chef at the art school, told the BBC: “I’m told it started in the basement and it’s worked its way all the way up through the five floors. 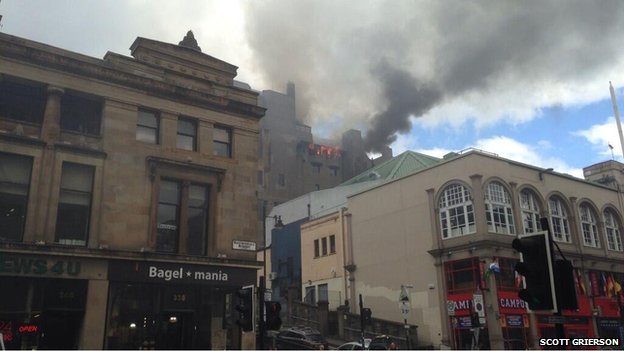 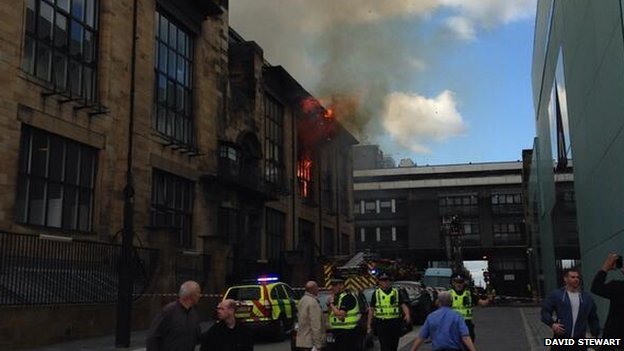 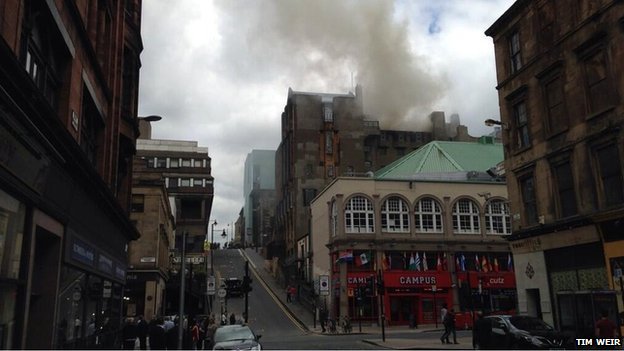 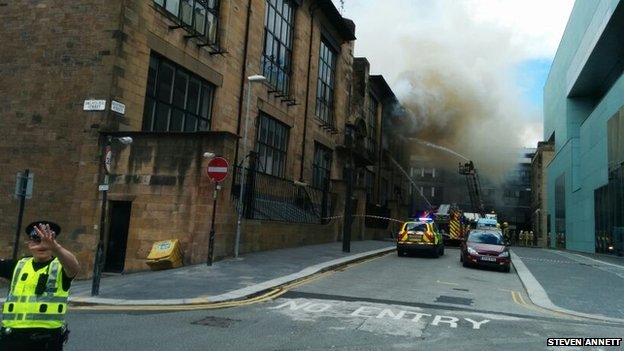 The president of the Royal Incorporation of Architects in Scotland, Iain Connelly, said the value of the building “goes well beyond Glasgow or even Scotland”.

In recent years, Glasgow School of Art has produced many of the UK’s leading contemporary artists such as Douglas Gordon and David Shrigley and three recent Turner Prize winners: Simon Starling in 2005, Richard Wright in 2009 and Martin Boyce in 2011.