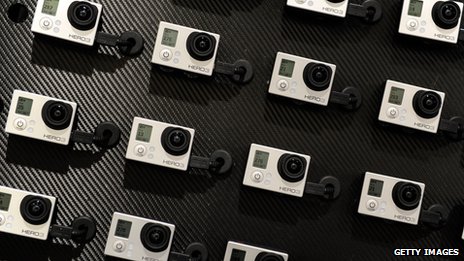 GoPro wearable cameras are sold in more than 100 countries

Wearable camera-maker GoPro has filed documents for a public share sale in the US. Money raised from the initial public offering (IPO) will go towards repaying debt and future acquisitions.

The filing did not reveal how many shares the company planned to sell, or their expected price.

The company makes wearable cameras and accessories which are popular with extreme sports enthusiasts.

In its filing with regulators the company said it expects to use the proceeds from the share sale to fully repay an outstanding loan, which was $111m as of 31 March this year.

GoPro also said “it may use a portion of the net proceeds to acquire or invest in complementary businesses, technologies or assets.”

The company is proposing to list on the NASDAQ Stock Market, under the symbol ‘GPRO’.

British bank Barclays, as well as the US financial institutions JPMorgan and Citigroup, are working on the share sale.

Founder and chief executive Nicholas Woodman and his family are the biggest stakeholders with a 49% holding.

The company said that Mr Woodman was “critical” to its success.

“The loss of Mr. Woodman could adversely affect our business, financial condition and operating results,” the statement said.

Taiwanese manufacturer FoxConn has a minority stake in GoPro, which it purchased in 2012 for $200m. That deal values the camera maker at about $2.25bn.

Since the company launched its high-definition camera model in July 2009, it has sold more than 8.5 million HD cameras.

GoPro’s products are sold in more than 100 countries.