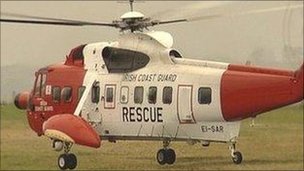 The Irish coastguard was involved in the rescue

A fisherman has been rescued from the sea off the coast of County Donegal after his cries for help were heard by a farmer on land.

The fisherman was found clinging to a lobster pot after getting into difficulties in Tullagh Bay, near Clonmany on the Inishowen Peninsula.

A farmer near the shoreline heard the man’s cries and raised the alarm.

A spokesperson for Lough Swilly Lifeboat said the man was “exceptionally lucky” to be alive.

Joe Joyce said: “Thanks to those people on the shore, that man will probably be walking around today.”

Two lifeboats, a rescue helicopter and a coastguard rescue boat were scrambled to the area after the man was discovered at about 13:50 BST on Sunday.

A local fishing vessel rescued him from the water.

He is currently being treated in Altnagelvin Hospital in Londonderry.

Mr Joyce said the man was about half a mile from the shore and it was “unbelievable” that his voice carried to land.

“He’s very, very lucky because there were other people walking on the beach and they didn’t hear a thing.”

Mr Joyce said there was no sign of the man’s boat.

“We’ve done a preliminary search in the area, but we haven’t discovered anything so we believe it has sunk.”

He added: “He was also very lucky he was wearing a life jacket.”