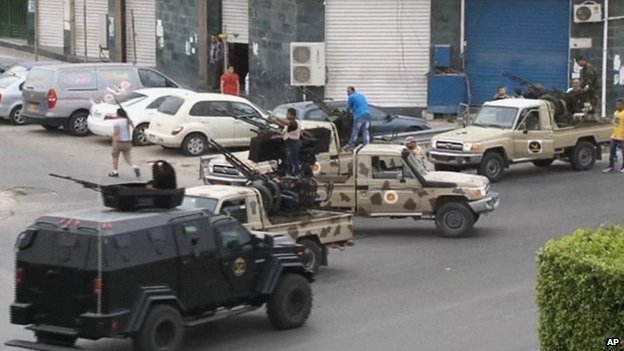 Libya’s embattled government has proposed that parliament go into recess in a bid to stave off a possible descent into renewed civil war.

An online statement suggested parliament should stop working after voting on this year’s budget until fresh elections can take place.

On Sunday, gunmen tried to storm the parliament building in Tripoli.

A renegade general, Khalifa Haftar, has vowed to drive Islamist militias out, but the government accused him of planning a coup.

Libya’s leaders have struggled to bring stability to the country since Muammar Gaddafi was ousted in 2011, with militias still powerful in many areas.

The Libyan government insists it remains in control despite recent clashes.

But as the security situation worsened, Saudi Arabia closed its embassy in Tripoli on Monday. 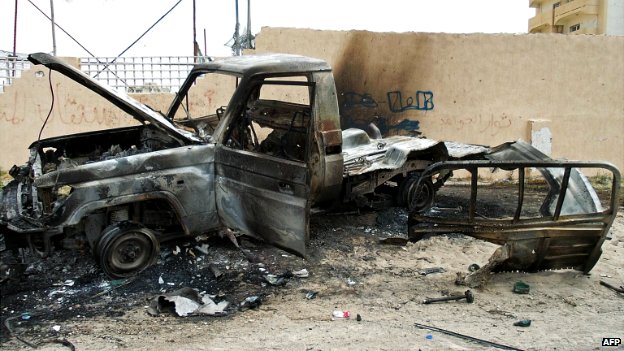 “All the diplomatic staff have left due to the security situation,” Mohammed Mahmoud al-Ali said in a statement.

Foreign companies are also reported to be ordering their staff out of the country.

Workers with Algerian state energy firm Sonatrach have been recalled, sources at the company said, and Algeria is believed to have imposed restrictions on border crossings.

Algeria closed its embassy and consulate in Tripoli on Friday, saying its diplomats faced a “real and imminent threat”.

French oil firm Total has also cut its presence in the capital Tripoli to a minimum, a spokesman told Reuters.

Earlier on Monday, AP news agency reported that Libya’s army chief had ordered the deployment of Islamist militias in the capital.

The move came after Khalifa Haftar sent his paramilitary force into Tripoli on Sunday to attack the parliament building.

Mr Haftar, who quit as head of Col Gaddafi’s army and took charge of rebel forces during the 2011 uprising, now heads a group called the “Libyan National Army”.

A spokesman for the group said it launched the chaotic assault on the parliament to rid Libya of Islamist politicians, who it says have allowed extremists to take control of the country. 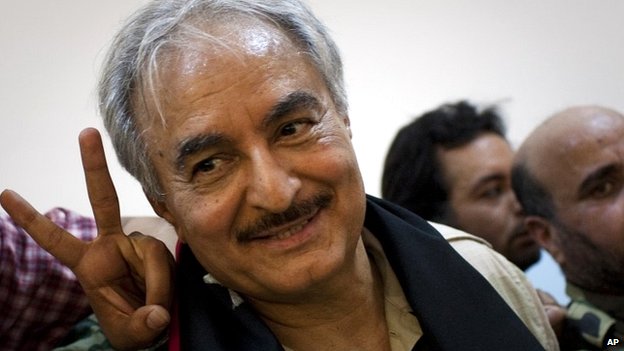 Mr Haftar’s forces launched an air and ground operation against Islamist militias in the coastal city of Benghazi on Friday, saying they wanted to “flush the terrorists out”.

Some government troops and aircraft were said to have taken part in the operation, but acting Prime Minister Abdullah al-Thinni condemned it as illegal and “a coup against the revolution”.

The rebel groups that fought to remove Col Gaddafi from power have become de-facto powerbrokers in the vacuum of Libya’s political chaos, correspondents say.

The planned new constitution remains unwritten and the country has had three prime ministers since March.