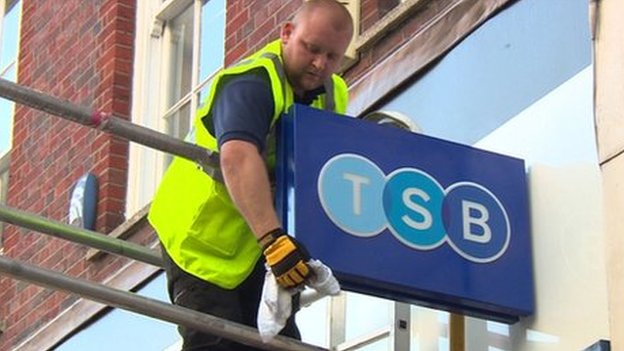 The TSB brand was revived by Lloyds last autumn

Lloyds Banking Group is to float a 25% stake in its TSB business on the London stock market.

The sale is set to take place next month and there will be an opening for ordinary investors to buy shares.

TSB is being floated to meet European Commission competition rules regarding state aid. Lloyds was bailed out by the UK taxpayer in 2008.

The Co-operative Bank was set to buy TSB but did not go ahead after a £1.5bn black hole emerged at the Co-op Bank.

Lloyds must sell its remaining stake in TSB before the end of 2015.

Shares will be offered to institutional investors and to intermediaries for ordinary investors. The bank will give ordinary investors one free share for every 20 shares they buy (up to the value of £2,000) and hold for a period of one year after the float.

You wait for one challenger bank to come along and suddenly you are swatting them away like flies.

After government and opposition demands that there should be more banks on the High Street, TSB will join Metro Bank and Virgin Money as players in the retail market. Royal Bank of Scotland’s Williams and Glyn branch network with 1.7 million customers is also being prepared for European Commission-enforced independence.

TSB will need to show that this competition means something for customers. Chasing market share with “innovative” products often leads to problems as banks have found with payment protection insurance. “Packaged accounts” – which come complete with insurance products and special offers – could be next.

There is something of a contradiction here. The government wants boring “vanilla” banks which don’t do anything too racy. It also wants a competitive market. The two tend to pull in opposite directions.

António Horta-Osório, Lloyds Banking Group chief executive, said: “The decision to proceed with an initial public offering of TSB is an important further step for the group as we act to meet our commitments to the European Commission.

“TSB has a national network of branches, a strong balance sheet and significant economic protection against legacy issues,” he added.

The bank has 631 branches and 4.5 million retail customers, making it the seventh largest retail bank in the UK.

TSB will continue to use Lloyds banking operations and computer systems, the bank said.

Banking analyst Chris Skinner told the BBC that TSB – which is expected to be valued at about £1.5bn – was “really a new brand but on an old horse”.

The rationale behind spinning-off TSB rather than selling off its assets is to create a “challenger bank” to make UK retail banking more competitive, Mr Skinner said.

“There are new challenger banks – there’s Aldermore, Shawbrook, Handelsbanken, Metro, Tesco – there are a lot of banks actually launched into the UK economy.

“Over time we’ll end up probably again with just a few that actually succeed, and I’m waiting to see which are the few that succeed,” he added.