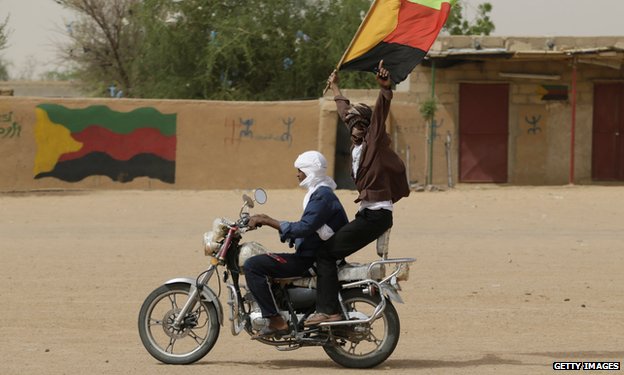 The MNLA is fighting for the independence of northern Mali

Rebels in northern Mali have agreed to a ceasefire, two days after clashes with the army threatened to throw the country back into chaos.

Some 20 Malian soldiers have died since Wednesday in fighting over who holds the town.

The separatists have gained control of much of northern Mali in recent days.

In 2012 a Tuareg rebellion in northern Mali triggered a military coup in the capital, Bamako and an Islamist takeover of the north.

Civilian rule was re-established in 2013, but Islamist and separatist forces remain active in some areas.

Mr Abdelaziz, the president of Mauritania, flew to Kidal on Friday to meet rebel groups including the National Movement for the Liberation of Azawad (MNLA).

A rebel spokesman confirmed the ceasefire to the BBC. He said the rebels would remain in their positions. 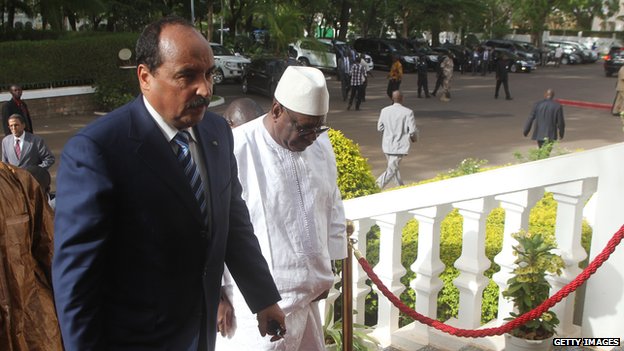 Minister for Internal Security General Sada Samake signed the ceasefire on behalf of the Malian government at 21:30 GMT on Friday, reports the BBC’s Alex Duval Smith in Bamako.

The ceasefire agreement includes a pledge to revive talks and the release of 300 Tuareg prisoners held in the capital, our correspondent says.

Violence broke out in Kidal on Saturday when Malian Prime Minister Moussa Mara visited the town to show support for government forces based there.

The rebels seized government buildings, killed at least eight civilians and took around 30 hostages, who were later released.

The separatists said they defeated government forces the town on Wednesday.

MNLA fighters have also taken control of several other towns in the north, including Menaka, Agelhok, Anefis and Tessalit. They said earlier on Friday that they were close to the key city of Gao.

The government has accused the Tuaregs of being backed by al-Qaeda militants, and called for an immediate ceasefire.

France, which deployed troops to Mali last year to prevent an Islamist takeover, has also called for a truce.