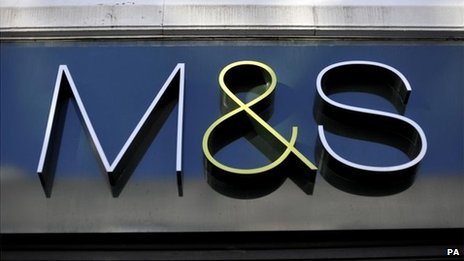 Marks and Spencer has reported a 3.9% fall in underlying annual profit to £623m, the third consecutive year its profits have fallen.

Like-for-like UK food sales, which strip out the effect of new stores, rose 1.7%, while general merchandise – which includes clothing – fell 1.4%.

“General merchandise is not yet satisfactory. But a lot of the heavy lifting has been done,” he told BBC Radio 4’s Today programme.

Mr Bolland said that since he took the helm three years ago, there had been heavy investment to make the retailer “fit for purpose”.

“It [rising profit] takes a while to follow. We are improving step by step,” he said.

M&S said the clothing market was “challenging” and blamed “unseasonal conditions” and “high levels of promotional activity” for the drop in full year general merchandise sales.

However, the firm said its clothing sales had returned to growth in the final three months of the year, marking the first time in three years that sales have increased.

It said it had also now “refreshed” the womenswear departments in its top 70 stores.

M&S clothing department has been struggling in recent years as sales have fallen.

It hired Belinda Earl, the former chief executive of Debenhams and Jaeger, as head of style in 2012.

Marks also said its new website, launched earlier this year, would take four to six months to “settle in”.

However, it said online sales had risen 23% in the year, outperforming the overall market.

It said it had also outperformed the overall market on food sales, with the rise in like-for-like sales in the three months to the 29 March marking its 18th consecutive quarter of growth.