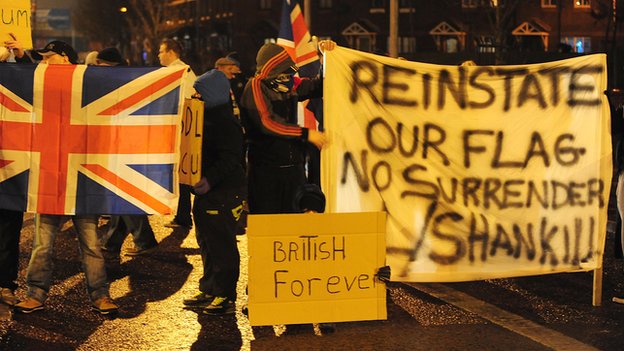 Senior judges agreed to list the challenge for hearing next month.

They were told it involved issues of operational importance for how the PSNI deals with parades.

In April, the High Court said a police commander misdirected himself by thinking the law stopped him in halting the parades and arresting participants.

The PSNI’s handling of the demonstrations was also found to have breached the human rights of a nationalist resident exposed to accompanying disorder.

The verdict was delivered in a case over weekly processions from east Belfast into the city centre during December 2012 and January 2013.

Demonstrations were staged in response to the decision to restrict the flying of the union flag at City Hall to designated days only. It had previously been flown all year round.

A man who lives in the nationalist Short Strand district went to court over the PSNI’s failure to provide assurances that it would prevent any future parade past his home.

He claimed this breached his privacy and family life entitlements under Article 8 of the European Convention on Human Rights.

It was also contended that police failure to prevent the parades contravened both the Public Processions (NI) Act 1998 and the Police (NI) Act 2000.

Lawyers for the resident, identified only as DB, argued that no notification was given for any of the parades in December or January.

Police instead allowed un-notified processions to take place and failed to arrest those involved in organising and taking part, they claimed.

DB’s legal team contended that he had been left “besieged” by the serious disorder, violence and attacks on his home.

Mr Justice Treacy held that Assistant Chief Constable Will Kerr, the commander in charge of the PSNI operation around the protests, was “labouring under a material misapprehension” in believing police were hampered from stopping the parades by either the 1998 Act or human rights legislation.

During the period in question police did not behave proactively in relation to prosecuting those organising and participating in the parades, the judge found.

In his assessment, ACC Kerr did not appear to have fully appreciated that an un-notified parade has the same status as one that takes place in defiance of a Parades Commission determination.

He also described the policing operation at that time as being characterised by “unjustified enforcement inertia”.

Immediately after his verdict was delivered, the chief constable confirmed it would be challenged.

Counsel representing the PSNI went into the Court of Appeal on Friday to request an early hearing.

He told judges: “The issue in this case is one of some operational importance to police in terms of managing processions.

“I have been asked to seek an expedited hearing of the appeal.”

But according to DB’s barrister the court may first have to decide whether the issue is now academic.

Lord Chief Justice Sir Declan Morgan then agreed to have the case put into the list for June.