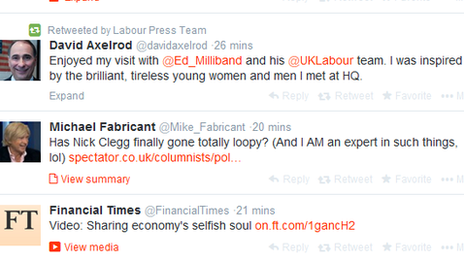 David Axelrod wrote: “Enjoyed my visit with @Ed_Milliband and his @UKLabour team.”

The reference to Ed Miliband with its incorrect spelling actually links to a spoof Twitter account in the Labour leader’s name. The site includes tweets saying: “I am resigning.”

But the Conservatives leapt on the error, querying whether Mr Axelrod “had actually met” the Labour leader.

A former adviser to US President Barack Obama, Mr Axelrod has been visiting London for the first time since being hired by Labour earlier this year.