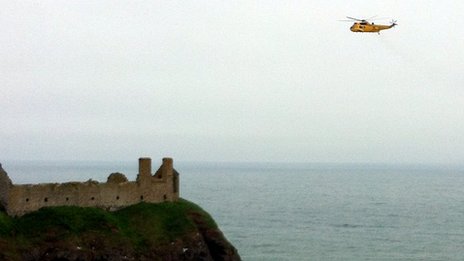 An RAF helicopter was involved in the search

Two fishermen who had been feared lost at sea off the Aberdeenshire coast have been found safe and well.

The crew, 75-year-old Jim Reid and his 35-year-old grandson David Irvine, from Inverbervie, were found on Thursday morning.

They were found in the boat about 50 miles off the coast of Montrose by another fishing vessel.

The search, involving lifeboats, fishing boats, helicopters and a plane, had earlier been called off.

Vessels in the area had been asked to look out for the boat but no more searches had been planned.

The search area took in a stretch of coastline from Stonehaven to St Cyrus, and far out to sea.

Anxious relatives and friends had been waiting at the harbourside for news.