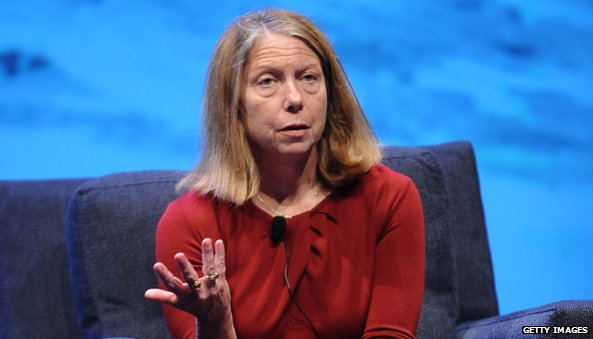 In a surprise move, the New York Times newspaper has announced that it has replaced executive editor Jill Abramson – the first woman to lead the paper – with immediate effect.

Dean Baquet, 57, the paper’s managing editor, has been named as the replacement.

Arthur Sulzberger Jr, chairman of the New York Times company, gave no specific reason, but spoke of an “issue with management in the newsroom”.

“While still too early to conclude, it’s clear that even the world’s most powerful women are not safe from negative narrative if they are assertive.” – Forbes

“Rumours swirl that pay equity or her management style are to blame. As yet, she’s not saying.” – The Daily Beast

“Abramson’s exit was unexpected and almost brutally abrupt. She left without addressing the newsroom, [and] was taken off the paper’s masthead within a few minutes of staff being informed of the change” – The Guardian

“Abramson and Baquet had reportedly clashed over the newspaper’s daily direction and management. Some at the Times have been privately critical of Abramson’s management style” – The Washington Post

“Her dismissal, after less than three years in the job, was met with disappointment by some women in the newsroom, and could be perceived as a step backward in the cause of female leadership at The Times and elsewhere in the industry.” – The New York Times

In a statement, she said: “I’ve loved my run at The Times. I got to work with the best journalists in the world doing so much stand-up journalism.”

A spokeswoman rejected reports that there had been friction when Ms Abramson discovered her male predecessor had a more lucrative pay deal, saying that was incorrect.

Mr Baquet, a Pulitzer Prize-winning journalist who formerly edited the Los Angeles Times, will become the first African-American to lead the paper.

The New York Times recently reported net income of $1.8m, and said that both print and advertising sales had grown for the first time in several years.

Also on Wednesday, Natalie Nougayrede, editor in chief of Le Monde, quit after a power struggle with senior staff.

In a letter, published on Le Monde’s website, she wrote of “personal attacks” that impeded her plan to turn around the newspaper.