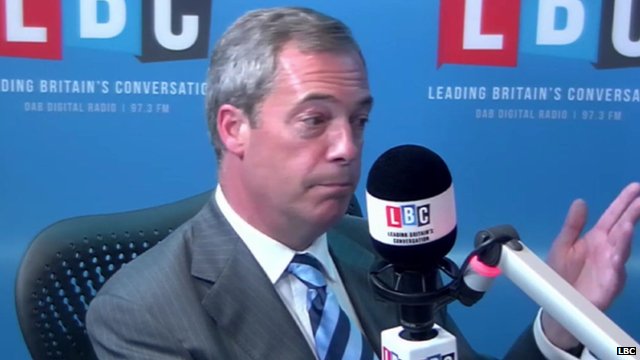 Nigel Farage’s comments have been branded a “racial slur”

UKIP leader Nigel Farage has been criticised by politicians over comments he made about Romanian immigrants.

Mr Farage said he thought people would be concerned if a group of Romanians moved in next door.

Labour leader Ed Miliband said the comments were a “racial slur”, while Lib Dem leader Nick Clegg said the remarks had no place in modern Britain.

On Sunday, Mr Farage said he regretted his form of words but said there was a “real problem” of Romanian criminality.

In an interview for LBC Radio on Friday, Mr Farage was asked what the difference was between having a group of Romanian men and German children as neighbours.

“You know what the difference is,” Mr Farage replied.

He added: “I was asked if a group of Romanian men moved in next to you, would you be concerned? And if you lived in London, I think you would be.”

He also said many migrants coming to the UK had been “forced into a life of crime” by “real poverty” in their country.

In a statement following the interview he said: “Any normal and fair-minded person would have a perfect right to be concerned if a group of Romanian people suddenly moved in next door.”

He told Sky News: “I think they were a racial slur but I don’t think of Nigel Farage as a racist himself.”

I think anyone who singles out one community, one nationality, and says ‘I don’t want to live next door to them’, I really think that’s the politics of division and I think it really should have no place in modern Britain”

Deputy Prime Minister Mr Clegg said Mr Farage’s mask was slipping and that the UKIP leader had “a rather nasty view of the world”.

He told BBC One’s The Andrew Marr Show: “I think anyone who singles out one community, one nationality, and says ‘I don’t want to live next door to them’, I really think that’s the politics of division and I think it really should have no place in modern Britain.

“I would say to people if you don’t like that point of view, if, like me, you are really put off by this very divisive, nasty approach to things then please go out and vote.”

Keith Vaz, chairman of the Home Affairs Committee, said the comments had echoes of abuse against members of the Asian community in the 1960s.

“I just hope people will look at this and recognise that we are an open, tolerant, compassionate country,” he said.

“Yes, we want to have a controlled immigration system; yes, we want to sort out the welfare system, but we shouldn’t put these labels on as UKIP do.”

Asked about his comments on Sunday during an interview with ITV, Mr Farage said: “I regret the fact that I was, sort of, completely tired out, and I didn’t chose, I didn’t use the form of words in response that I would have liked to have used.

“I should have just hit back immediately and said, look, understand there is a real problem here, you can’t deny it.

“Too much criminality from those gangs from Romania has come to London – I could have been clearer. But, do you know what? In life, sometimes we get things wrong.”