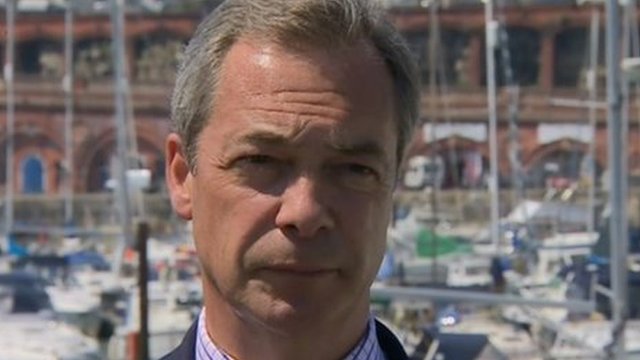 Nigel Farage: “There is a very real problem here”

Nigel Farage has defended controversial remarks he made about Romanians, saying people would be right to be concerned if a group moved in next door.

The UKIP leader was speaking to the BBC the day after appearing to say he had been wrong, because he was tired.

On four occasions in an interview with the BBC’s Political Editor Nick Robinson, Nigel Farage was offered the opportunity to apologise but refused.

Speaking on Monday, Labour MP David Lammy said that coming from an immigrant family he “remembered a context in which some people said you don’t want these people living next to you”.

“What Nigel Farage said over the weekend was racist, so I’m clear, he’s a racist,” he told the BBC’s Daily Politics.

David Cameron has said the UKIP leader had said some “really pretty unpleasant things” while the Labour leader Ed Miliband accused him of making a racial slur.

It was only when I asked him if it would be right to say that you should be worried if Nigerians or Jamaicans or Irish people were your neighbours that his position started to shift.”

When pressed to apologise for a fifth time, and a parallel was drawn with posters in windows that said “no blacks, no Irish here”, Mr Farage said: “If I gave the impression in that interview that I was discriminating against Romanians then I apologise certainly for that.”

Mr Farage added: “I do not wish for people to feel in a discriminatory manner towards Romanians but I do say there is a very real problem here, that everybody else has run away from, brushed under the carpet, the whole organised crime element and the impact that has had on London and other parts of the country. That is a serious issue.”

Mr Farage said that what he did regret was using the words “you know what the difference is” in his interview with James O’Brien on LBC on Friday – which he used when asked about the difference between Germans living next door or Romanians. 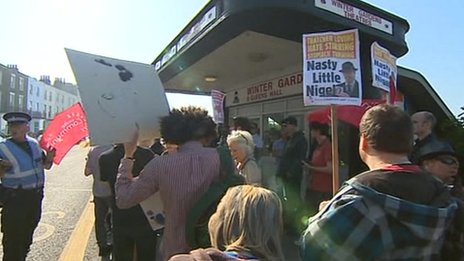 “I am apologising for not taking the question full on and for giving the impression that by saying ‘you know what I mean’ there was somehow an agenda underneath.”

In his interview with Nick Robinson on the campaign trail on Monday he also said: “Can we just have an honest appraisal of what has happened to post Communist Romania?

“Across the whole of the European Union, amongst all 28 member states, 7% of all crime is committed by 240 Romanian gangs. The reality is people would be concerned.

“If we stop the gangs coming in through Dover and elsewhere there would be no need to be concerned.”

“But I want to change that so people wouldn’t be concerned, and we can do that by getting back proper border controls.”

Speaking later on the BBC’s Newsnight, Mr Farage acknowledged he had been wrong to state 7% of all crime in the EU was committed by Romanian gangs after Europol told the programme it was incorrect and the figure actually related to numbers of criminal organisations, not numbers of crimes.

He also conceded that recent controversies involving “idiots” in the party had damaged the party and there were many people who now “despised” UKIP, something he found hurtful.

Deputy Prime Minister Nick Clegg accused Nigel Farage of engaging in the “politics of division”, saying he should be talking about immigration in a “grown-up and sensible way”.

“I think what we’ve seen over the last few days is that, despite all that cheery bonhomie from Nigel Farage, the mask is slipping,” he said.

“To say that you should single out one community or one nationality and say you don’t want to live next door to them is just the politics of division.

Dr Tommy Tomescu, a Romanian dentist who is standing in Thursday’s polls for the Europeans Party, said the Romanian community in London was “very upset” at Mr Farage’s comments.

“I think he was desperate to be sure that he came in first place and pushed too much,” he said.

This was not the first time that Mr Farage had offended Romanians, he added, suggesting that the UKIP leader had told “lies” about the number of his countrymen and women who were likely to come to the UK when immigration controls were lifted at the start of the year.

“Some people just say it is the five-year electoral cycle but it is unbelievable what has happened,” he said.

He urged the UKIP leader “to change his way of thinking”.

“He said he made a mistake but he does not show a deep recognition that it was wrong. He needs to apologise but to apologise in a credible way.”