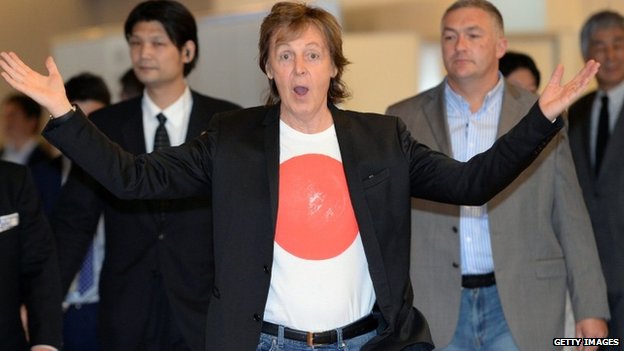 Paul McCartney said he hates to let people down

Former Beatle Sir Paul McCartney has had to cancel his tour of Japan due to illness, organisers have said.

The 71-year-old is believed to have contracted a virus.

He is still scheduled to perform a concert in Seoul, South Korea, on 28 May followed by 19 performances in the United States.

A message on his website said that doctors have ordered him to have a “complete rest” and that he “hates to let people down”.

The announcement means he will not play the remaining two gigs of his “Out There Japan Tour 2014”.

Fans will now not get to see him play at the Nippon Budokan hall in Tokyo, which is where the Beatles performed during their first Japan tour in 1966.

Organiser Kyodo Tokyo said in a statement that McCartney “will regrettably have to cancel the remaining Japanese shows. Paul is still not feeling better and this cancellation is unavoidable”.

A quote from Sir Paul on his website said: “Thank you so much for your kind messages of support.

“I’m so very touched. Unfortunately my condition has not improved overnight. I was really hoping that I’d be feeling better today. I’m so disappointed and sorry to be letting my fans down.”