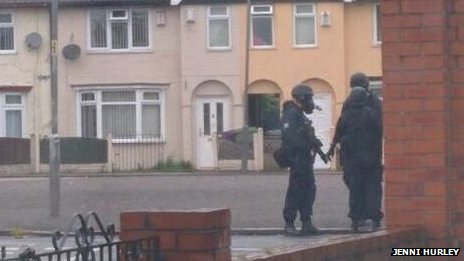 A person has been shot by armed police who entered a house in Liverpool, police investigators have said.

Eye witnesses said they had heard several gun shots and saw police enter the house after a smoke bomb was used.

Merseyside Police said they were unable to confirm if anyone within the cordon was armed.

Neighbour Jenni Hurley told BBC Radio Merseyside that when she woke at about 07:30 BST, “there were all police cars in my street”.

“You could see everything. We could see the riot vans and they started putting the police tape up.

She said she was unsure if the shots had come from inside or outside the house.

She added that “at one point, there was four police cars in my road and in Shellingford – you couldn’t even see down the street, there were that many police cars and the helicopter”.