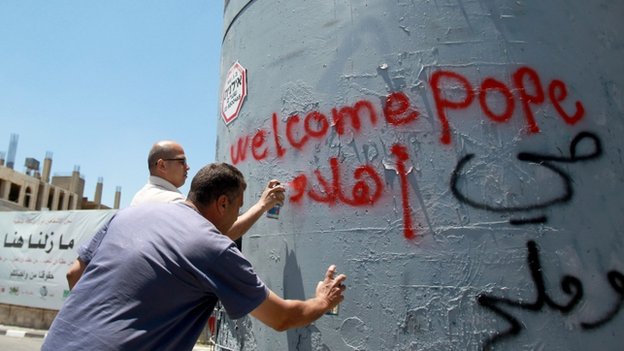 Pope Francis is due to arrive in the West Bank city of Bethlehem as he continues his three-day tour of the Middle East.

He will hold an open-air mass by the city’s Church of the Nativity for about 8,000 local Christians.

Later, the Pope will travel to Tel Aviv and then Jerusalem where he will meet Bartholomew I, the Orthodox Patriarch of Constantinople.

The tour’s official purpose is to improve ties with the Orthodox Church.

However, correspondents say Palestinians are hoping for a show of support as his visit comes just weeks after peace talks with Israel broke down.

Palestinian officials have already noted that Pope Francis will be the first pontiff to travel directly to the West Bank rather than enter via Israel.

Many Palestinians see it as a recognition of their push for full statehood.

Ahead of the trip, the Vatican’s Secretary of State Cardinal Pietro Parolin defended the Palestinians’ right to a “sovereign and independent” homeland and said he hoped the Pope’s visit would lead to “courageous decisions” for peace. 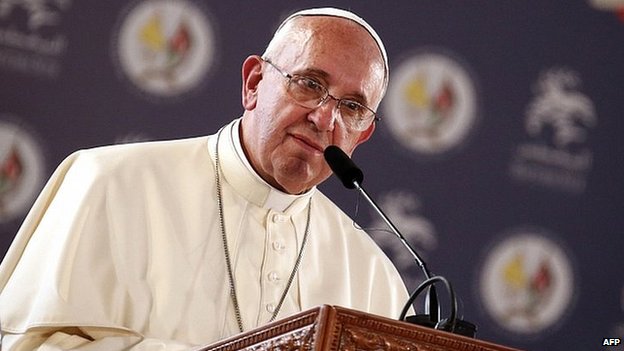 Pope Francis praised Jordan for its welcome to Syrian refugees

During the afternoon, Francis will take a short flight to Tel Aviv where he will be formally welcomed to Israel by President Shimon Peres before flying on to Jerusalem.

Israel has issued restraining orders against several Jewish right-wing activists this week over concerns that they could try to disrupt the visit.

In Jerusalem, the Pope will commemorate the 50th anniversary of a historic meeting of Catholic and Orthodox leaders who moved to end 900 years of division between the two churches.

The Pope’s tour began on Saturday with a visit to Jordan.

He was welcomed by King Abdullah II and in a speech at the royal palace, he stressed the need for an “urgent” solution to the Syrian conflict.

He praised Jordan for its “generous welcome” to Syrian refugees.

On Monday the Pope is due visit the al-Aqsa mosque complex in Jerusalem’s Old City followed by the Dome of the Rock and the Western Wall.

Pope Francis will be the fourth leader of the Roman Catholic Church to visit Jerusalem, after Popes Paul VI, John Paul II and Benedict XVI, who went there in 2009.