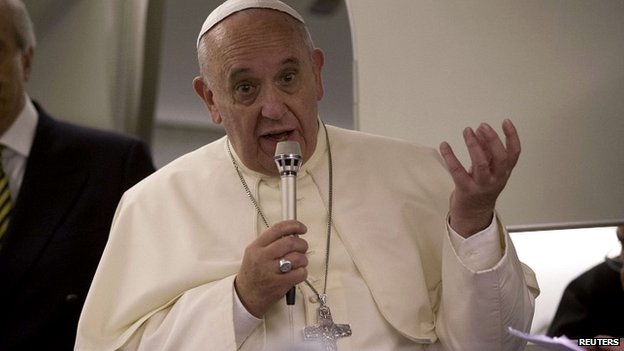 Talking to reporters on his way back from the Middle East, the Pope said child abuse was an “ugly crime”

Pope Francis has announced he will meet a group of sex abuse victims next month after comparing the “ugly crime” to performing “a satanic Mass”.

Speaking after his Middle East tour, Pope Francis said he will show zero tolerance for anyone in the Roman Catholic Church who abuses children.

“Sexual abuse is such an ugly crime … because a priest who does this betrays the body of the Lord,” he said.

The Pope, 77, spoke to reporters for nearly an hour on his flight to Rome.

The BBC’s Jeremy Bowen, who travelled with the pontiff, said many Catholics will be glad to hear Pope Francis taking a tough stance.

But it remains unclear if the Pope’s zero tolerance policy will extend to bishops who are accused of turning a blind eye to abuse by priests in their dioceses.

Pope Francis said he would meet eight victims and Cardinal Sean Patrick O’Malley, who is head of a commission set up by the Vatican to investigate sex crimes committed by priests and to care for victims.

Cardinal O’Malley said last month he will recommend that negligent clerics be held accountable regardless of their rank in the Church – a move that victims’ groups have pressed the Vatican on.

The Pope is under pressure to act after the UN recently published a report accusing the Vatican of systematically placing the “preservation of the reputation of the Church over the protection of child victims.”

Earlier on Monday, the Pope called for an end to religious intolerance during a mass in Jerusalem at the room where Christians believe Jesus held the Last Supper.

He visited the most important holy sites for Muslims and Jews in Jerusalem’s Old City on the final day of his Middle East tour. 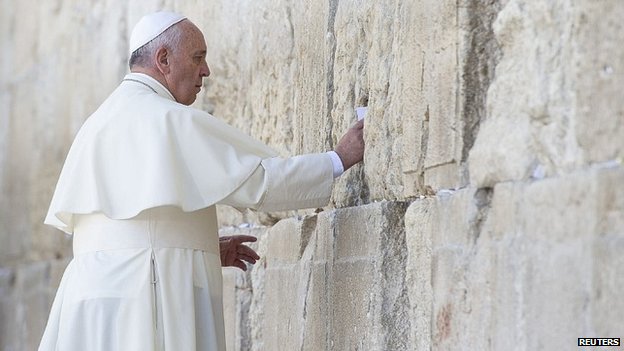 Earlier on Monday, the Pope visited the Western Wall in Jerusalem and met Holocaust survivors

The pontiff has been feted by Israel and the Palestinians, and has invited their presidents to the Vatican.

Both Israel’s Shimon Peres and Palestinian leader Mahmoud Abbas have given a positive response.

But Pope Francis sought to play down the importance of his invitation, saying he was not qualified to be a mediator and that proper negotiations were necessary for a peace deal.

“We are coming just to pray, then everyone goes home,” he said. “But I think prayer is important: praying together.”

Our correspondent says the Pope’s visit to the region will have made him more aware of the tangled politics of peacemaking.