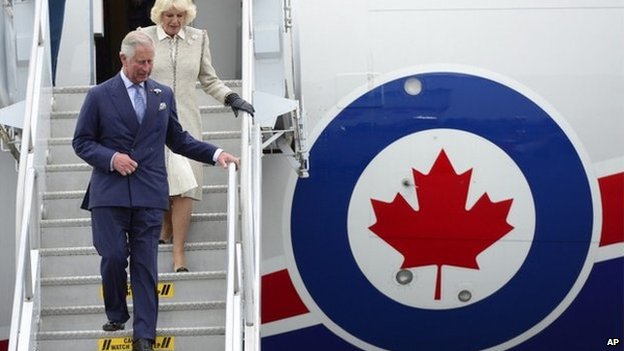 The Prince of Wales and Duchess of Cornwall have arrived in Canada for the start of a four-day royal tour.

Prince Charles and Camilla were greeted by dignitaries and the waiting media ahead of dozens of engagements across three provinces.

They flew into Halifax, Nova Scotia, on board a Canadian Forces Airbus.

The royals will attend events including one marking the 150th anniversary of the Charlottetown conference which led to the Canadian Confederation.

After stepping off the plane, the duchess was presented with flowers by Grace Elizabeth Lenihan, aged three, and her nine-year-old sister Molly Jane.

The royals were presented to a Royal Canadian Mounted Police officer, Chief Superintendent Brian Brennan, before leaving for a reception with the Governor General of Canada, David Johnston.

They chatted informally with the governor general at a photocall at Halifax’s Government House. 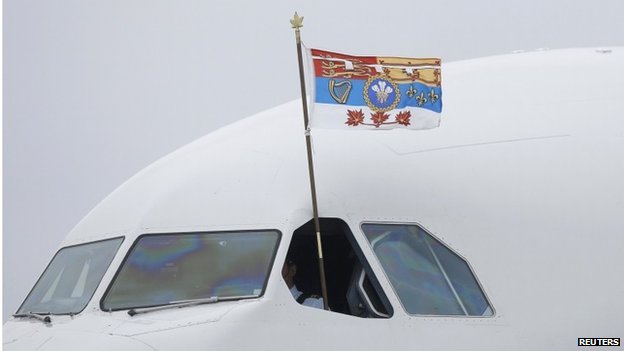 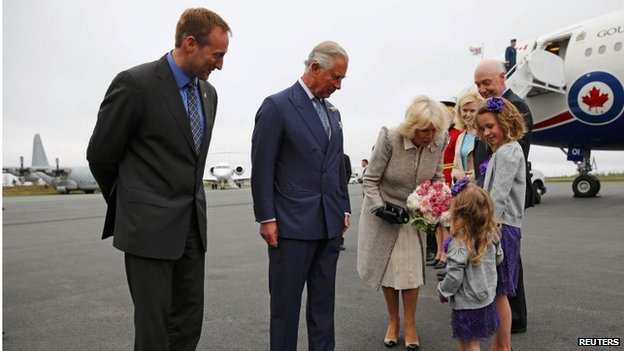 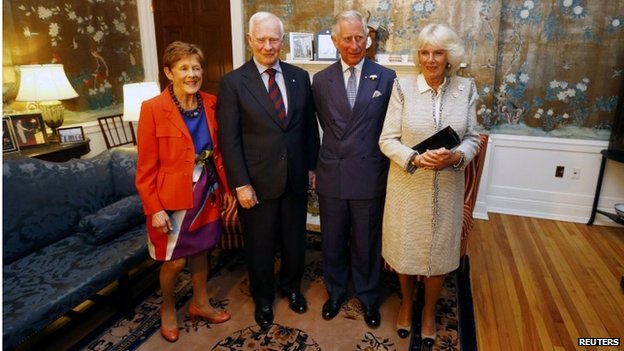 Prince Charles and Camilla met the Governor General of Canada, David Johnston, and his wife Sharon

To mark the royal tour, Prince Charles has been appointed to the Queen’s Privy Council for Canada some 57 years after his father, the Duke of Edinburgh, was given the same honour.

During their visit to Halifax, the royal couple will watch military personnel take part in the Grand Parade on Victoria Day, the Canadian national holiday to mark Queen Victoria’s birthday.

The prince will deliver a speech at the parade and lay a wreath at a cenotaph to commemorate those killed in World War One.

The royal couple will visit a military family resource centre in Halifax which provides support to some 20,000 local servicemen and women and their families.

Charles and Camilla will have tea with World War Two veterans and war brides at the Canadian Museum of Immigration at Pier 21, which was where half a million military personnel left for the conflict.

Prince Charles will meet traders at a local farmers’ market in Halifax, while the duchess will witness the work of a project that helps victims of domestic violence.

The couple will visit Pictou County for an event to celebrate Celtic heritage in Nova Scotia.

They will travel to Charlottetown, Bonshaw and Cornwall in Prince Edward Island and Winnipeg in Manitoba during the tour.

It is the third time they have travelled to Canada together and is Charles’s 17th official visit to the country.