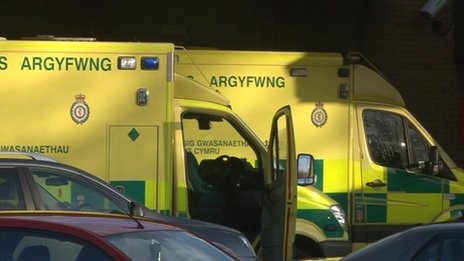 A man died after having to wait more than four hours in an ambulance because there was no room in a hospital in south Wales, an inquest has heard.

Former miner Michael Bowen, 58, from Ogmore Vale, was taken by ambulance to the Princess of Wales Hospital, Bridgend, on 16 January at 06:15 GMT.

He was assessed on arrival but was returned to the ambulance when there was no room in the A&E department.

He was eventually admitted but died in the afternoon.

The coroner Andrew Barkley will consider whether there was a link between the delay in being admitted and the cause of death.

The inquest in Aberdare heard that Mr Bowen was rushed to hospital with breathing problems and stomach pain. He later suffered a seizure and died just before 14:00 GMT.

Pathologist Dr Stephen Leadbetter told the inquest a post-mortem examination showed Mr Bowen had died due to thrombosis, causing blockage in the veins which was linked to cirrhosis of the liver.

Deborah Lewis, a sister in the hospital’s emergency department, said there was a shortage of staff early on 16 January and staffing did not reach its full complement until 10:30 GMT.