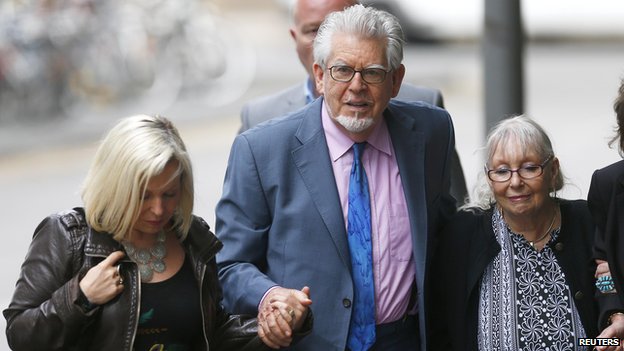 Mr Harris arrived at court with his wife (r) and daughter

Rolf Harris fondled a 15-year-old girl while she was on a trip to the UK in 1986, a court has heard.

Australian Tonya Lee – who has waived her right to anonymity – said she had come to Britain with a theatre group.

The entertainer, now 84, invited her to sit on his lap, before moving his hand up her leg and assaulting her, the jury was told.

He is accused of assaulting a total of four girls in the UK between 1968 and 1986, when they were aged between seven or eight and 19.

The musician, artist and TV presenter is said to have met the girl and her group at Heathrow Airport, later going with them for dinner at a pub.

It was there, the jury at Southwark Crown Court heard, that he is alleged to have carried out the assault.

After going to sit on his lap, Ms Lee – now 43 – said: “I could feel that there was some movement happening beneath me.

“He was moving back and forth rubbing against me.

“It was very subtle, it wasn’t big movements. Everything just seemed to be going on as normal.”

The jury heard that Mr Harris patted her on the thigh. Ms Lee said he then “began to move his hand up my inner thigh”.

She said she felt “very uncomfortable” when Mr Harris touched her genitals over her clothing.

She said she “started to panic” and rushed off to the toilet.

“I was wondering what to do… and also I was confused,” she said.

“The whole time this was happening just normal interaction was going on,” she told the court.

Ms Lee said she decided not to speak out at the time because the theatre group’s artistic director, Kathy Henkel, was a friend of Mr Harris’s.

She said when she came out of the toilet Mr Harris was waiting outside and gave her “a big bear hug”.

He then put his hand down her top, fondling her breast, she said.

“I was petrified… I was in shock,” Ms Lee said.

She said she thought no one would believe her if she said anything “because it was Rolf Harris”.

Ms Lee said she became “an empty vessel” after the alleged assaults and developed an eating disorder, causing her to lose weight.

She said she “stopped eating” and would “throw up” during the six-week UK tour.