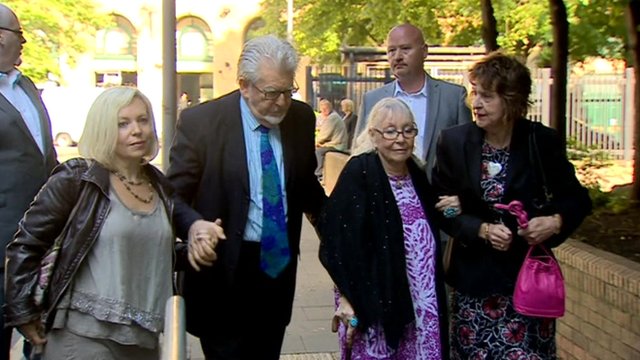 Entertainer Rolf Harris told a girl he wanted to be the first person to give her “a tongue kiss” when she was 11 or 12 years old, a jury has heard.

A woman from Darwin, Australia, told Southwark Crown Court she had been “repulsed” when Mr Harris then gave her a “gentle hug” and kissed her.

The woman is a prosecution witness but her allegation does not form part of the charges against Mr Harris, 84, who denies 12 counts of indecent assault.

Mr Harris, from Bray, Berkshire, is accused of assaults on four girls in the UK between 1968 and 1986, when they were aged between seven or eight and 19.

Giving evidence, the woman said the childhood incident took place when she was staying with family friends because she was off school ill.

She had come downstairs from her sick bed to find Mr Harris polishing a piece of wood under the house. She told the court he started talking to her, asking her how old she was.

The woman told the court when she gave Mr Harris her age, “he said ‘good, I want to be the first one to introduce you to a tongue kiss’”.

After the alleged abuse the entertainer “just stopped and then he just went and said ‘have a look at what I’ve been doing’”, and showed her his polishing work.

The court heard that the woman told “a couple of friends” about her claims, without being taken seriously, but also each of her three husbands, because she was uncomfortable about being kissed in that way.

She told the jury: “It’s just this thing I have left over from when I met Mr Harris”.

Her current husband persuaded her to go to the police about the claim, in the wake of media reports about the entertainer.

I pulled away, I was totally shocked, and immediately turned and left him on the dance floor on his own”

The woman was also said to have been assaulted by her cousin when she was 17. However, she rejected a suggestion by defence barrister Sonia Woodley QC that she had confused that incident with her claim against Mr Harris.

Another prosecution witness told the court Mr Harris groped her as they danced at a party in New Zealand in 1970.

The jury was told she was 16 or 17 and was working for a wine company when she met the entertainer.

“He was a celebrity from television. I was quite honoured to see him coming through the door,” she told the court.

He was “very friendly and very relaxed”, and “being stupid” as he posed for photographs.

But she said when she agreed to Mr Harris’s offer to dance “in a flash, in a moment… I saw the dark side of a man who I thought could be trusted”.

She claimed Mr Harris put his hand under her dress and tried to place it between her legs.

“I pulled away, I was totally shocked, and immediately turned and left him on the dance floor on his own,” she added.

The women contacted Scotland Yard after reading about Mr Harris’s arrest in the UK last year.

Mr Harris’s defence barrister pointed out she had not said the entertainer had tried to he put his hand between her legs in her statement to police.

Questioned by Ms Woodley, the woman said it was “incorrect” to suggest “his hand wandered down, maybe innocently, and he did not put his hand up your dress”.

A third women was called by the prosecution to give evidence about an alleged indecent assault by Mr Harris in Malta when she was 18 and on holiday in 1970.

She met him on a beach after her boyfriend had been injured while swimming and the entertainer had told them where to find a doctor.

The woman told the jury the incident had taken place in a room in a bar where Mr Harris said he would show her some of his art.

She claimed Mr Harris kissed her, touched her breast and put his hand into her underwear, before he “just stopped whatever he was doing and just cuddled me”.

The woman told the court she was “just in shock really, happy – that was it. I thought I was going to be raped. I don’t know what I thought, really”.

She told her boyfriend that Mr Harris had kissed her but nothing else because she was embarrassed, the jury heard. Questioned in court, the woman denied she had “fabricated” the entire story.

The trial was adjourned until Tuesday.