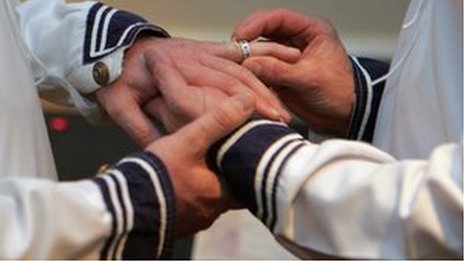 Last month, a bid to legislate in favour of same-sex marriage in Northern Ireland was blocked.

A Church of Ireland Bishop has voiced his support for the introduction of civil marriage for same-sex couples.

The Bishop of Cork, Dr Paul Colton, is thought to be the first Church of Ireland bishop to make such a statement.

Last month, the Assembly rejected a motion calling for the introduction of same-sex marriage in Northern Ireland.

He told BBC Radio Ulster’s Sunday Sequence programme that it was a very “divisive” debate.

“The events in society are moving very rapidly and the church is not at all up to pace with the debate,” he said.

“Having said that I’m also among those in the church, and perhaps we’re only a minority, albeit a significant one that long to see the day when we can have a discussion – as we’ve had discussions over the years on all sorts of other issues about the nature of marriage – with a view, ultimately, at least to the blessing of same sex couples following civil unions if not to their marriage in church as is happening in other parts of the Anglican communion.”

Chairman Dr Richard O’Leary said: “The bishop’s acknowledgement of the hurt that the church has inflicted on its gay and lesbian members is greatly appreciated especially as it comes on the day we are holding services to mark the International Day Against Homophobia and Transphobia (IDAHOT)”.

Northern Ireland is now the only part of the UK which has not passed a law to introduce same-sex marriage.

The first gay marriages have recently taken place in England and Wales, with Scotland due to follow later this year

Ahead of the assembly motion, the Church of Ireland restated its position on same-sex marriage, repeating what was affirmed at its general synod in 2012.

“The Church of Ireland affirms, according to our Lord’s teaching, that marriage is in its purpose a union permanent and life-long, for better or worse, till death do them part, of one man with one woman, to the exclusion of all others on either side. The Church of Ireland recognises for itself and of itself, no other understanding of marriage,” it said.

Catholic bishops in Northern Ireland wrote an open letter to all MLAs urging them to reject the motion.

The letter said the motion undermined the principle of equality by applying it “inappropriately”.