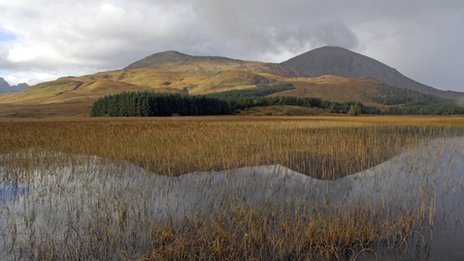 A mapping project to work out who owns every part of Scotland is to be completed within 10 years.

He said he agreed with the group that “a fundamental step on this journey must be having a clear understanding” of who owns land in Scotland.

He added that the move would benefit everyone.

He argued that land transactions were “more difficult and expensive” if land was not already registered.

Mr Wheelhouse added: “This is a vital underpinning step in Scotland’s land reform journey and will ensure that at last everyone will know who owns Scotland.”

Registers of Scotland has been asked to finish the register in a decade, with all public land registered within five years.

The Land Reform Review Group set out 62 recommendations in a report on Friday.

Among the suggestions, it called for a new law to limit how much land any single person can own in Scotland.

Setting a target for completing the register of land ownership will bring closer the day when there is a definitive answer to the question: ‘Who owns Scotland?’”

It said councils should be given the right to force the sale of vacant or derelict plots.

The group, set up in 2012, wants the Scottish government to be “radical in its thinking and bold in its action”.

The review group also said local government taxation needed to be modernised and that serious consideration should be given to introducing a system of land value taxation, which could be an alternative to the council tax.

“Setting a target for completing the register of land ownership will bring closer the day when there is a definitive answer to the question: ‘Who owns Scotland?’.

“We hope that this momentum is maintained as the Scottish government gives consideration to our other recommendations.”

The Scottish government appeared to rule out one recommendation on taxation within hours of the group’s report being published.

Experts said there was no clear public interest in keeping a universal exemption of agriculture, forestry and other land-based businesses from non-domestic rates.

The government stated: “We can confirm there are no plans to make changes to the position of agricultural business rates relief.”