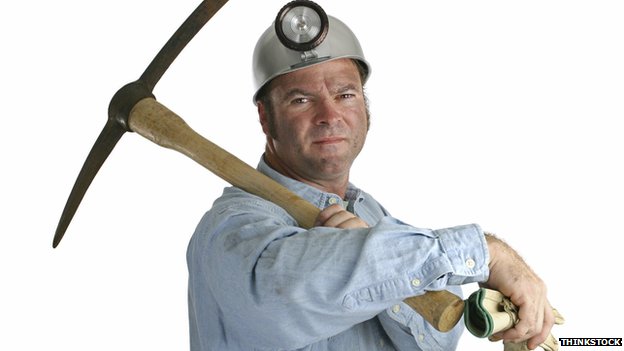 Where would you expect to find the mining capital of England and Wales, asks Anthony Reuben.

Perhaps you’d think of Redcar and Cleveland in the North East or Selby in Yorkshire.

Well, according to a report from the Office for National Statistics released on Friday, they’re numbers two and three, in terms of having the highest proportion of the workforce employed in mining and quarrying.

In the number one spot is Spelthorne in Surrey, with 3% of the working population, or 1,287 workers employed in the sector.

If you find that surprising, well so do the local council and chambers of commerce.

It’s worth remembering that these figures are based on the results of the 2011 Census, so what is important is the sector people consider themselves to be working in, even if official classifications would put them in a different sector.

This creates some confusion – for example, if you’re a press officer for a bank, do you classify yourself as working in information and communications, or financial and insurance?

One of the biggest employers in the area is BP, which has a site in Sunbury employing about 5,000 people, but BP reckons its staff there are unlikely to think of themselves as working in quarrying or mining.

There are also a number of gravel pits in the area, mined for aggregates and sand. So, together with the demise of the coalfields further north, perhaps that explains why Spelthorne is the mining and quarrying capital of the country.

But if you look further into the figures it turns out that while Spelthorne has the highest proportion of people saying they work in quarrying and mining, the place with the highest actual number of employees is Westminster with 2,271.

And it is at that point that you start to wonder if a lot of global mining companies employ a lot of lobbyists in the area, or if perhaps the figures are starting to look a bit unconvincing.

But maybe I’m wrong. If you’re a Spelthorne miner or a Westminster miner (and I don’t include data-mining) then get in touch and tell us about it.