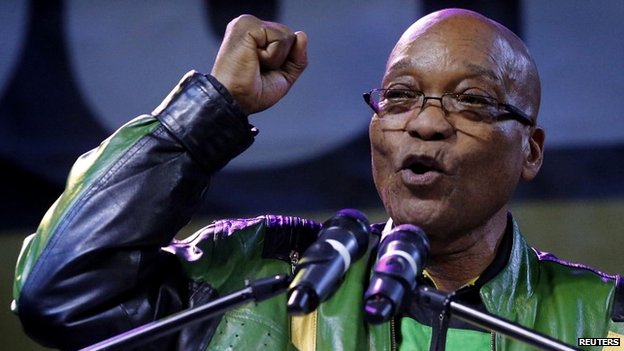 South Africa’s President Jacob Zuma will be sworn into office on Saturday for a second term, following his party’s victory at the polls.

The African National Congress (ANC) won a commanding victory in the country’s general election on 7 May.

More than 4,000 guests are expected at the ceremony in Pretoria, including Zimbabwean President Robert Mugabe.

Neither the US or UK are sending a representative but officials from Russia, China and India are attending.

President Zuma was officially elected for a second five-year term on Wednesday by the ANC-dominated parliament.

The expected formality of the re-election was disturbed only by MPs from the Economic Freedom Fighters (EFF), who turned up at parliament in red overalls and hardhats.

The EFF, led by former ANC member Julius Malema, said they dressed as maids and miners to show they intend to represent the interest of workers. 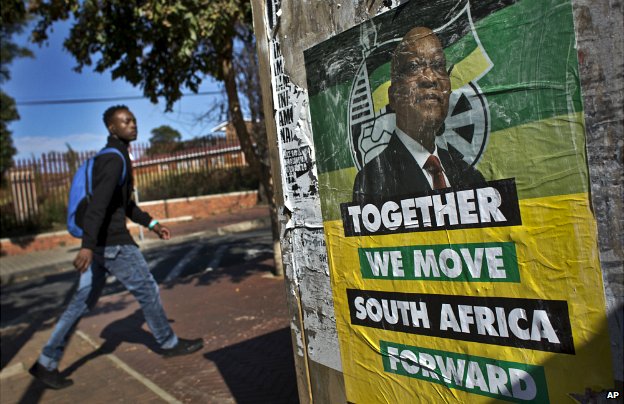 Once the celebrations are over, Mr Zuma faces the tough tasks of rejuvenating South Africa’s economy

South African media say Saturday’s inauguration ceremony will be as much about celebrating Nelson Mandela and 20 years of democracy as about officially sealing Mr Zuma’s re-election.

Mr Zuma will take the oath of office shortly after prayers open the ceremony at 11:00 local time (09:00 GMT).

Several heads of state will be in attendance, including Mr Mugabe, Nigeria’s Goodluck Jonathan, and Ugandan President Yoweri Museveni.

The US is not sending a representative but a White House statement said President Obama spoke to Mr Zuma on Friday to congratulate him on his re-election.

The centrepiece of the event is a 90-minute cultural show, with performances from local musicians, dancers and a youth choir.

Proceedings will be broadcast at 45 public viewing sites across the country as well as being shown live on television and radio.

Around 20,000 people are also expected to descend on the Union Building in Pretoria, the site of the ceremony, to watch on large TV screens.

Mr Zuma will get back to work immediately after the national celebrations and is expected to announce his cabinet on Sunday.

His choices will be watched closely by political analysts with the country’s economic problems continuing to mount and almost a quarter of all South Africans unemployed.