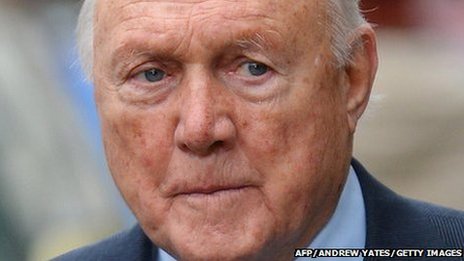 Hall, 84, from Wilmslow, Cheshire was found not guilty of 15 charges of rape and four counts of indecent assault by a jury at Preston Crown Court.

He was found guilty of one count of indecent assault. Hall was accused of abusing the girls between 1976 and 1981.

At the beginning of the trial he admitted indecently assaulting one woman when she was aged 13.

Hall’s barrister said that under the law at the time the offences were alleged to have happened he would have been charged with unlawful sex with a girl under 16.

The former It’s a Knockout presenter, of Wilmslow, Cheshire showed no reaction as the jury of eight women and four men delivered the verdicts after more than seven hours of deliberation.

He mouthed “thank you” to the jurors as he was led away to the cells to continue serving his sentence for earlier offences.