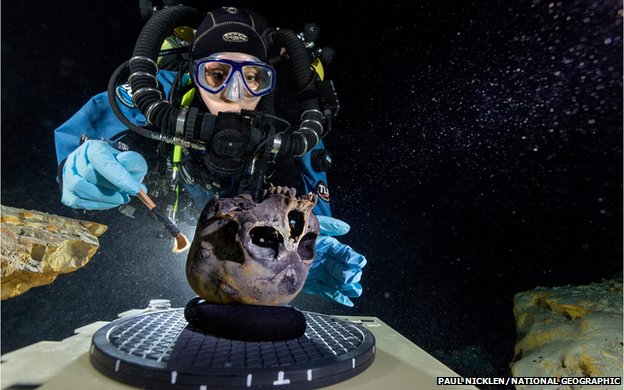 The ancient remains of a teenage girl discovered deep underground in Mexico are providing additional insights on how the Americas came to be populated.

Divers found the juvenile’s bones by chance in a vast, flooded limestone chamber on the Yucatan Peninsula.

Researchers have told Science Magazine her DNA backs the idea that the first Americans and modern Native American Indians share a common ancestry.

This theory argues that people from Siberia settled on the land bridge dubbed Beringia that linked Asia and the Americas some 20,000 years ago before sea levels rose.

Sea levels 20,000 years ago were low enough to expose a land bridge across the Bering Sea

These people then moved south to populate the American continents.

The genetics of modern Native Americans would certainly appear to link them into this story. But their facial features set them apart from the oldest skeletons now being unearthed.

These ancient people had narrower, longer skulls. The differences have hinted that perhaps there were multiple immigrations from Siberia (or even Europe).

However, the remains of the Yucatan girl, dubbed Naia – which means “water nymph” in Greek – does not follow that line of thinking, because although she had the slender features associated with the earliest Americans, her DNA shares commonalities with modern Native Americans.

It appears she fell quite a distance and struck something hard”

Lab analysis of teeth and bone samples link her to a particular genetic lineage known as Haplogroup D1.

This same marker is found in substantial numbers of modern Native Americans.

“This lineage is thought to have developed in Beringia, the land that now lies beneath the Bering Sea after its ice age occupants became genetically isolated from the rest of Asia,” explained lead author Dr Jim Chatters.

“Thus, Naia, one of the earliest occupants of the Americas yet found, suggests that Paleoamericans do not represent an early migration from a part of the world different than that of the Native Americans.

“Rather, Paleoamericans and Native Americans descended from the same homeland in Beringia.

“The differences between them likely arose from evolution that occurred after the Beringian gene pool became separated from the rest of the world.” 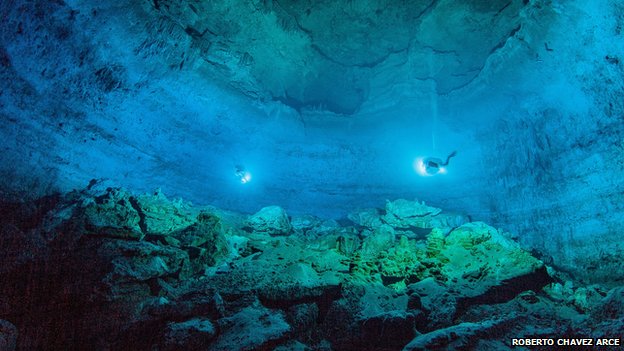 The Yucatan Peninsula is famous for its giant limestone sinkholes, or cenotes.

The chamber where the girl was found represents one of these pits before its roof has collapsed to produce a wide surface opening.

To reach the natural amphitheatre, divers had to swim almost 1km (0.6 miles) through a water-filled tunnel.

“The moment we entered inside, we knew it was an incredible place,” recalled Alberto Nava.

“The floor disappeared under us and we could not see across to the other side. We pointed our lights down and to the side; all we could see was darkness.

“We felt as if our powerful underwater lights were being destroyed by this void. So we called it ‘black hole’, which in Spanish is ‘Hoyo Negro’.” 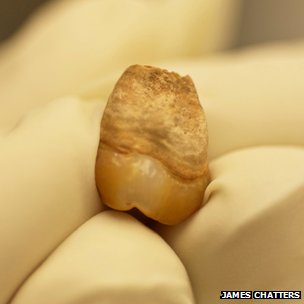 Scientists can only speculate as to why Naia had been in the cavern. Skeletal remains of many animals also litter the pit’s floor.

The suspicion is that they all were looking for water, because the region had a very dry climate 12,000 years ago and the cavern would have been mostly dry but for a few pools.

Perhaps they stumbled and fell to their death in the darkness.

“Her pelvis is broken and it appears to have been broken at or around the time of her death because it’s fractured in a way that relatively young bone would break rather than ancient bone,” said Dr Chatters.

“So, it appears she fell quite a distance and struck something hard. I think she died almost instantly, if not instantly.”

On the face of it, the new study supports research published in February that looked at the genetics of an infant who died at about the same time in what is now the US State of Montana.

This investigation of “Anzick” boy, as he has become known, was conducted on the main DNA material found in the nuclei of the cells.

Naia’s DNA, on the other hand, was sourced from outside the nuclei of her cells – in structures called the mitochondria. These carry much more limited information.

“In my view they have a way to go before they can say anything substantial,” he told BBC News.

“It’s extremely difficult to get at the nuclear DNA and decoding it is very complex, but this is what they need to do. Until they do that, they cannot tell us a lot about where Native American Indians came from.” 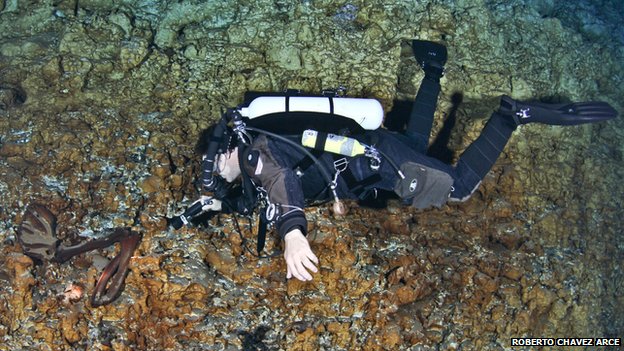