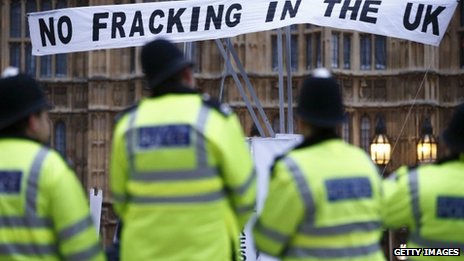 The number of people in favour of fracking for shale gas in the UK has fallen below 50%, a new poll suggests.

Just 49.8% were in favour of shale gas extraction when researchers from the University of Nottingham asked 3,657 people earlier this month.

This is the lowest number in support of fracking since the university started its poll on the issue in 2012.

The latest results found 31.4% were against fracking, while 18.4% were undecided.

“The May 2014 survey confirms that the turn against fracking for shale gas in the UK has deepened,” says the report.

And it cites the anti-fracking protests which took place in the village of Balcombe in West Sussex in 2013 as a tipping point when the tide of public opinion towards shale gas extraction began to shift.

Since those protests the number of people against fracking has been steadily rising, it says.

Tory peer Lord Howell of Guildford – who apologised last year after saying that fracking should take place in the North East because it was “desolate” – recently spoke about the issue again, and said the Conservative Party could lose votes by pursuing plans to frack.

But the poll suggested that this may not happen as it found support for fracking higher among Tory and UKIP voters – around 68% – while Labour and Lib Dem supporters were generally much less in favour.

The survey also found that an increasing number of people were better educated about the technology and processes behind shale gas extraction.

Fracking is the process of drilling down into the earth before a high-pressure water mixture is directed at the rock to release the gas inside. Water, sand and chemicals are injected into the rock at high pressure which allows the gas to flow out to the head of the well.