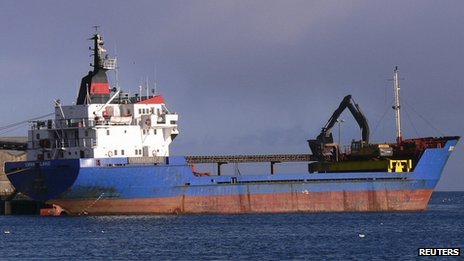 An inquest into the deaths of six Russian sailors after a cargo ship sank off Gwynedd has heard a dramatic account of its last minutes.

The MV Swanland was taking a cargo of limestone from Llanddulas, near Colwyn Bay, to the Isle of Wight when it was hit by a massive wave during a gale.

Just two of the eight-man crew survived when the ship sank in November 2011.

The survivors told the hearing the vessel was hit by a big wave and an alarm prompted the crew to take action.

The wreck was found one mile off the Welsh coast at a depth of 80 metres.

I was under the water. All I can remember is that I was trying to swim up”

End Quote
Roman Savin
One of the survivors

The inquest in Caernarfon heard that Mr Safonov’s body was the only one recovered and a post-mortem examination showed he had drowned.

North West Wales Senior Coroner Dewi Pritchard Jones told the jury of seven he would be asking them to consider if the other men died in the same way.

Statements from the two surviving crewmen Roman Savin, 27, and Vitaliy Karpenko, 48, were read to the jury.

Second officer Roman Savin said he was on the bridge in the early hours of 27 November, 2011 when the ship was hit by a wave.

He told the inquest he turned on the deck lights and could see the ship’s mid-ship bulwark was bent.

He sounded the alarm and members of the crew began putting on their immersion suits, while the ship’s captain sent a mayday message.

As he and other crew gathered on deck he said “we felt a blow to the ship”.

“I was under the water. All I can remember is that I was trying to swim up.”

On the surface he swam to a life-raft and climbed in before helping the other survivor Vitaliy Karpenko climb into the same craft.

They began shouting and whistling to attract the attention of other crew members but they did not spot any of them, the inquest heard.

In his statement, Mr Karpenko described the conditions as rough but he said “we have worked in worse conditions”.

The inquest also heard from master air crewman Richard Taylor, who was the winchman on a rescue helicopter stationed at RAF Valley.

He told the inquest the crew took off at 02:52 GMT, and having located the life-raft they searched for other survivors. They then picked up the two survivors and continued the search until about 05:30 GMT.

“It was fairly rough so it was difficult conditions that night,” he said.

Paul Mangnall, the supervisor at Raynes Jetty where the ship docked, told the inquest it was loaded in the same way as it had been on other occasions.

Glyn Aled Jones, a part-time shipping agent with responsibility for sorting paperwork regarding the ship and her load, said there was nothing unusual with the ship or the loading of it that day.

The hearing in Caernarfon is expected to last three days.