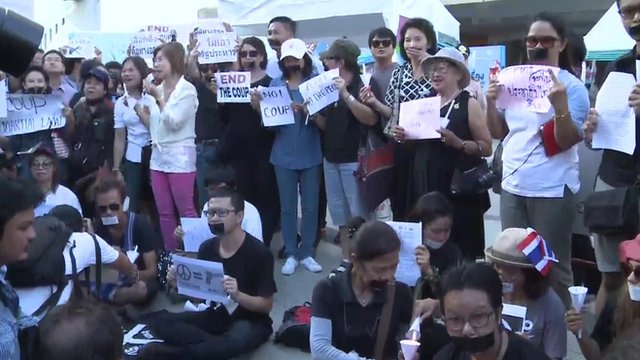 Protests have broken out on the streets of Bangkok, as Jonah Fisher reports

Thailand’s ex-PM Yingluck Shinawatra and a number of members of her family have been detained, as leaders of the nation’s military coup tighten their grip on power.

Ms Yingluck and scores of politicians from the deposed government had been told to report to the military.

She was kept for several hours and then driven to an undisclosed location.

Six of Thailand’s most senior military officers have now been appointed to run the country, with provincial commanders supervising local government.

The BBC’s Jonathan Head in Bangkok says that, unlike in previous coups, there have been no promises of a quick return to civilian rule.

Gen Prayuth told the meeting: “I want all civil servants to help organise the country. We must have economic, social and political reforms before elections. If the situation is peaceful, we are ready to return power to the people.”

Ms Yingluck, who had been prime minister until being removed by the judiciary this month, had been ordered to report to the military along with more than 100 other politicians, including acting PM Niwatthamrong Boonsongphaisan.

It was unclear whether Gen Prayuth met either of them.

There were reports Gen Prayuth was to meet Thailand’s revered King Bhumibol Adulyadej at the royal palace in Hua Hin, south of Bangkok, on Friday to explain the coup, but this has not been confirmed.

On Thursday the military suspended the constitution, banned gatherings and detained politicians, saying order was needed after months of turmoil.