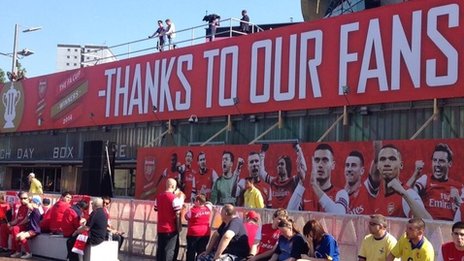 Thousands of people are expected on the streets of north London to celebrate Arsenal’s FA Cup win.

An open-top bus parade will start from the club’s Emirates Stadium at 11:00 BST.

The victory secured the Gunners’ first trophy in nine years and was the 11th time the club had won the competition.

Arsenal, who started the final as firm favourites, came from two goals down against Hull to win 3-2 in the dramatic final on Saturday.

The players will travel from the Emirates Stadium to Islington Town Hall, Upper Street and back in two open-top buses.