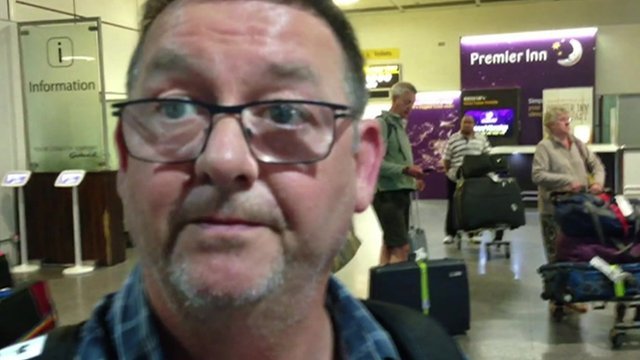 Hundreds of UK tourists are being evacuated from parts of the Kenyan coast, after the Foreign Office warned of a “high threat” from terrorists.

Tour operators Thomson and First Choice cancelled all flights to Mombasa until October and said some 400 holidaymakers would be flown back as a precaution.

The FCO advised against non-essential travel to areas within 37 miles of the Kenya-Somali border and Nairobi.

The main threat has been linked to the militant Islamist al-Shabab group.

TUI Travel, which operates Thomson and First Choice, said those already in the country would be flown home by Monday. 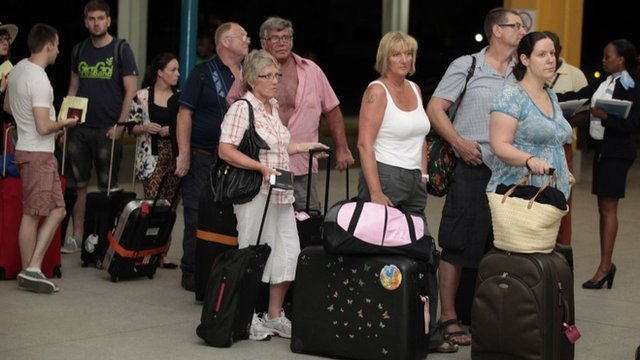 A spokesman confirmed a flight carrying some of the tourists landed at Gatwick on Friday morning, and that some holidaymakers were due to touch down at the airport at around 21:40 BST, and the remainder on Monday.

The FCO’s warning against non-essential travel covered the Mombasa Island area, Kiwayu and coastal areas north of Pate Island, the Garissa district, the Eastleigh area of Nairobi and the slum areas of the Kenyan capital. 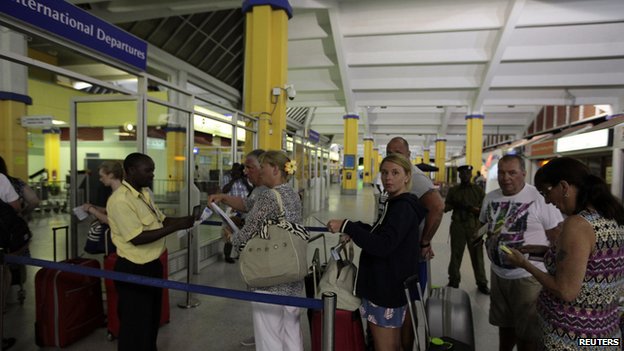 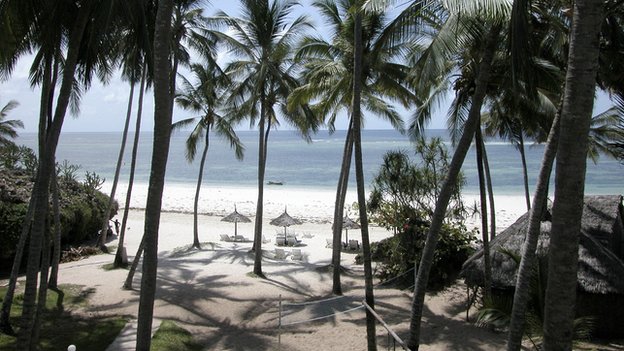 The popular Diani beach resort is not subject to any Foreign Office warnings. Local media recently reported a large drop in the number of tourists visiting the country in the last year. 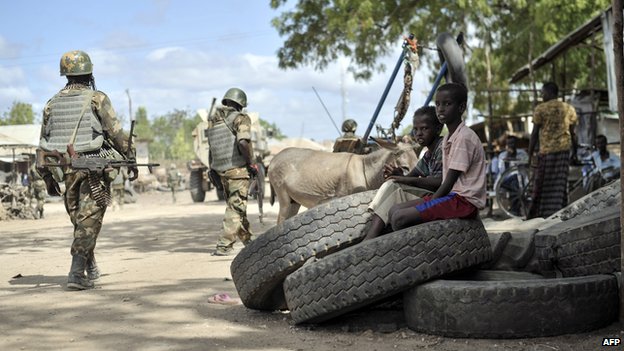 But it said its advice did not include the Diani beach resort or the nearby Moi International Airport.

It said the main threat was from terrorism, which included kidnapping, and that westerners could be targeted.

While Thomson and First Choice have cancelled flights until October, long-haul travel company Kuoni said it was not offering holidays to the Kenyan coast for the time-being.

It said in a statement: “Although the advice does not include Moi International Airport, Diani beach or Malindi, the main road to access these resorts goes through the restricted area defined by the FCO advice. This means that we are no longer able to offer holidays to the Kenyan coast at present.”

Meanwhile, holidaymaker Alex Dolphin from Surrey arrived back at Gatwick having spent three days at a resort on Diani Beach.

He told the BBC: “I didn’t feel uneasy until we were in a convoy of three coaches parked on the roadside waiting to leave for the airport.

“I was keeping an eye open as we drove through Mombasa.”

The United States, France and Australia issued similar alerts, prompting the Kenyan government to criticise the advice as “obviously unfriendly”.

BBC security correspondent Frank Gardner said the authorities may have been given a tip-off from an informant that al-Shabab was planning an attack.

“What sources are saying is that it is specifically westerners they are after – either by kidnap or blowing them up,” he said.

Our correspondent added that the Kenyan government was “upset” by the FCO warning, but he said this was a threat that the UK could not ignore.

Fearing the impact on the country’s tourism industry, Interior Ministry spokesman Mwenda Njoka said: “The threats are perpetual, we are at war. But we have not received any specific threat on the hotels.”

Holidaymakers had been told they were being evacuated “under armed guard”, British tourist John Bonar said on Twitter from Kenya on Thursday.

Foreign Office advises against travel to

Al-Shabab have carried out a spate of attacks in the region in response to the Kenyan military’s intervention in Somalia.

In April, a radical Muslim cleric, Abubakar Shariff Ahmed – alleged to have been recruiting young Muslim men for al-Shabab – was shot dead by unknown gunmen in Mombasa.

His death, the third such killing since 2012, led to riots in the city, which has a large Muslim population.

“There is a high threat from terrorism, including kidnapping,” the Foreign Office said in its travel advice.

“There has been a spate of small-scale grenade, bomb and armed attacks in Nairobi (especially the area of Eastleigh), Mombasa, and North Eastern Province.

“You should take care in public places where people gather, and exercise a heightened level of vigilance. “

Three people were killed and more than 80 wounded in explosions on two buses in the capital Nairobi earlier this month.

The Kenyan government said al-Shabab, which is linked to al-Qaeda, was behind the attacks.

The most high profile of the group’s recent attacks saw 67 people killed when its fighters stormed the Westgate shopping centre in September. 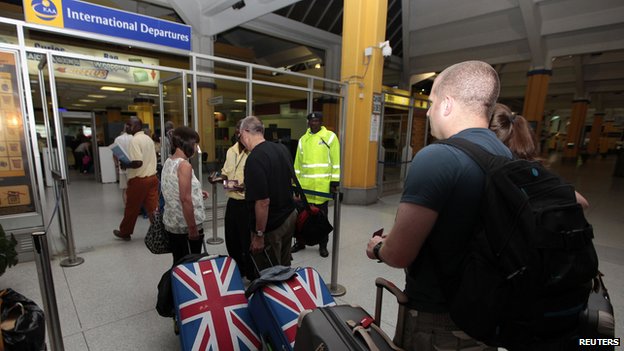 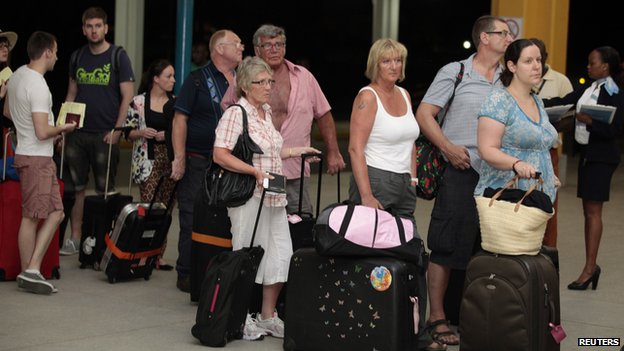 The Foreign Office said there were 5,000 UK nationals resident on the Kenyan coast, and 500 in or around Mombasa 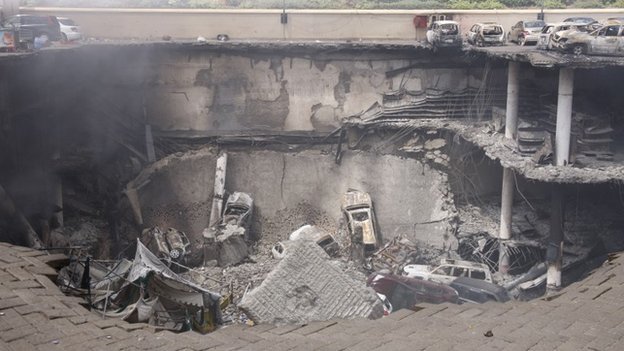 Sixty-seven people were killed last September during a siege of the Westgate shopping centre, which lasted four days

Thomson said customers due to fly to Mombasa before November should contact its call centre or their travel agent.

“We understand that many customers will be very disappointed about the cancellation of their holiday to Kenya,” the company said.

“However, in these types of situations we have to follow the FCO advice.”

Are you in Kenya? Are you or anyone you know affected by the evacuation?If you are happy to speak to the BBC you can email your experiences to haveyoursay@bbc.co.uk, using the subject line ‘Kenya’.