BBC News – Trek or treat: Should I pay for my friend’s charity holiday? 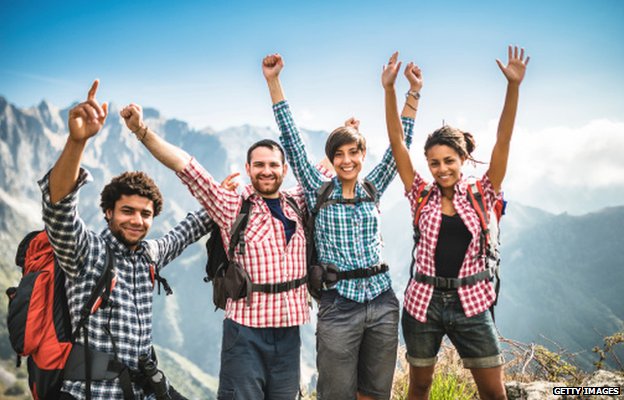 It has become commonplace to be asked to contribute to charity by sponsoring a parachute jump or exotic trek. But why should you fund other people’s trips of a lifetime?

You used to get something in return for giving to charity. Whether it was bob-a-job week or buying a cake at the church fete, it was not an all-round loss.

Even entering a raffle gave you an outside chance of winning a stuffed toy or a bottle of Madeira.

A quick internet search reveals pages of organisations offering to arrange walks to Everest base camp, skydiving, and other high-octane experiences – brazenly assuring participants they will not be out of pocket. 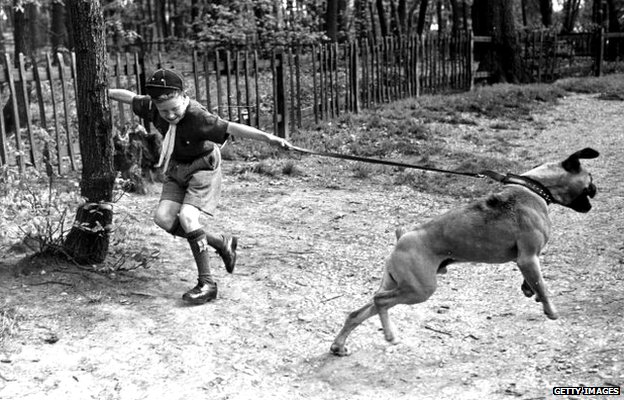 Bob-a-job week saw money raised for charity in return for chores done by cub scouts, such as dog-walking

“How much does it cost?” is the top query on one skydiving company’s FAQ page.

The answer: “Absolutely nothing!

“A bit of time and effort to collect enough sponsorship and you can skydive for free.

A trekking company trumpets: “Whether you want to lose weight, get fit, experience new cultures, or just achieve an impressive goal, all whilst raising funds for charity, we can help.”

Losing weight, getting fit and experiencing new cultures are evidently admirable things to do. 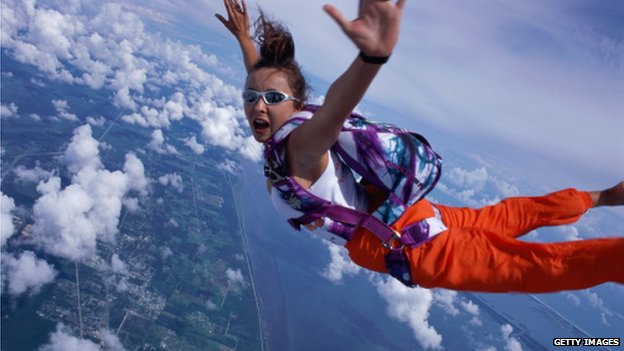 Want to go skydiving? Pay for it yourself

But are they about self-fulfilment or fundraising? It is arguable venturing up Machu Picchu or cycling around Australia are not charity events, they are activity holidays.

Last year alone, over 400 people helped to raise in excess of £750,000 to help fund our life-saving research into heart disease”

“A friend asked for sponsorship to swim with sharks,” she said. “As far as I’m concerned, that is asking me to pay for her hols.”

But did Miss Carter sponsor her friend? As it turns out, yes.

“I found it too difficult not to. I gave her a fiver and I’m still annoyed with myself.

“But mainly annoyed with her.”

There are usually two payment options: self-funded trips mean the participant covers the full cost of the expedition and all the money raised goes straight to the charity.

The alternative is raising a set amount, which pays for the trip with the remainder going to charity.

David Spenser, an accountant from Telford who pays a children’s charity via direct debit, said he is irritated by both.

“Even if people pay for their own trip, why should I then give them money?

“I went go-carting last week. I paid for it myself and I didn’t expect people to donate to a hospice because I had a nice time.” 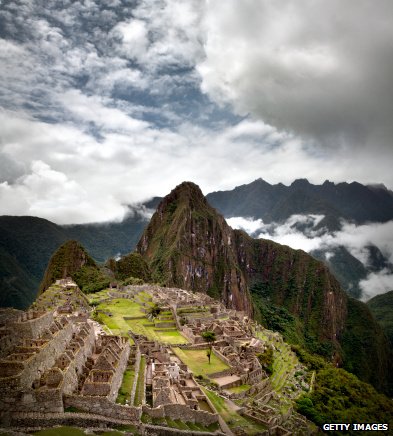 When a colleague approaches your desk clutching a sponsorship form it is difficult to refuse to stump up.

Peer pressure, coupled with a natural reluctance to say no, is the perfect combination to force you to hand over your hard-earned cash.

Psychologist Dr Judith Sills says it is important to learn to say “no”.

“It’s a beautiful thing – emotionally, spiritually, and even professionally – to be generous, to be supportive. But integrity is as essential as benevolence.

Maria Webb, from Redditch, Worcestershire, raised nearly £5,000 by walking the length of the Great Wall of China – about half went to charity.

“Yes, it was an amazing experience but it was really tough,” she says. “No way was it a holiday.”

Did she do it simply to raise money? “I wanted to do it for myself, obviously. But I don’t feel bad about choosing a funded option, because that £2,000 wouldn’t have been raised.”

Not saying “no” can breed resentment

The British Heart Foundation said: “People who support BHF by undertaking an overseas challenge provide an enormous benefit to the charity.

“Last year over 400 people helped to raise in excess of £750,000 for our life-saving research into heart disease.”

A trek or jump provides enjoyment for the fundraiser in a way sitting in a bath of beans or having their legs waxed does not.

Yet there is often less resentment about sponsoring someone to do something unpleasant. Why are we more generous if the fundraiser achieves no benefit?

It is a transaction, said behavioural therapist Philip Card.

“We have to get something back – for some it’s the warm fuzzy feeling of giving to a good cause, for others it can be schadenfreude,” he says. 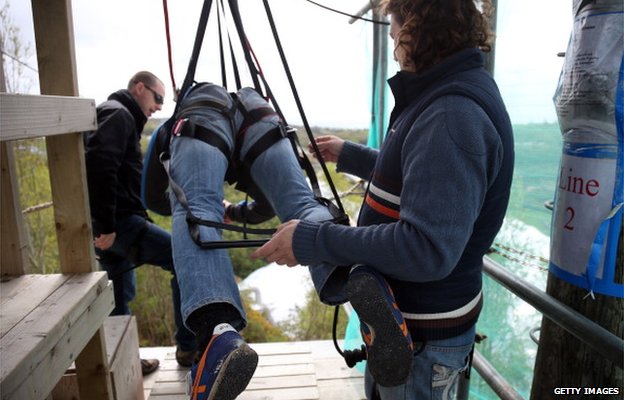 Why should you pay for your colleague to have an adrenaline-filled day out?

Imagine the reaction if you asked for sponsorship to stay in the Savoy hotel.

I went go-cart racing the other day. I paid for it myself and I didn’t expect people to give money to a hospice because I had a nice time”

One night in the Personality Suite River View costs £2,262 (including butler service and the ironing of one garment).

You will donate any money raised above that amount to charity.

A charity husky trail costs £2,474 (including a visit to an ice hotel and a celebratory dinner).

You will donate any money raised above that amount to charity.

What is the difference?

Effort and reward, says Tom Bell, who raised money for the air ambulance by cycling 350 miles in a week and paid all expenses himself.

“I’m self-employed, so I lost money. I trained for months.

“I’ll sponsor someone if there’s sacrifice.

“I wouldn’t sponsor a mountaineer to climb Everest – but I’d sponsor a lorry driver.”

Trek or treat: Is there a difference?

We find it difficult to say no, says Mr Card, because of fear your refusal will cause anger or hurt.

The flipside of that, he adds, is it can be difficult to ask for something for fear of triggering those responses in yourself.

“If I ask someone for a favour and they refuse, I’ll feel injured or annoyed,” he says.

Integrity is as essential as benevolence. ‘No’ says ‘this is who I am; this is what I value’”

“I’m therefore more likely to proposition them with something they feel they cannot refuse.

“Many of these events are couched in terms of heroism; if you say no, you should feel like a bad person.”

Mr Card’s theory seems to be supported by many appeals by charities.

“Are you brave enough [to skydive]” asks the Rainbow Trust website.

“Only the bravest of the brave need apply [to run a marathon]” says the Gurkha Welfare Trust’s.

“Feeling brave? Experience that adrenaline rush of a lifetime [on a zip wire]” says the PDSA’s.

But brave? Is bravery walking across a desert or doing a bungee jump?

Or is bravery saying no to people who want you to pay for it? 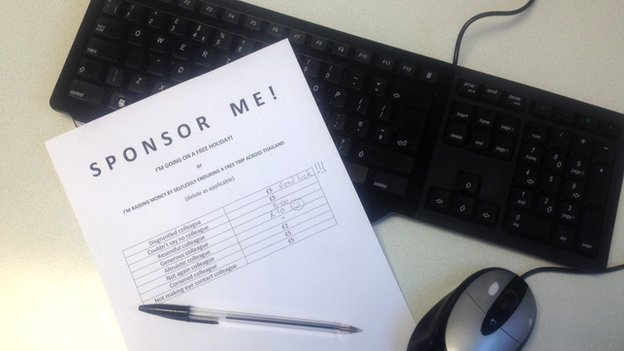