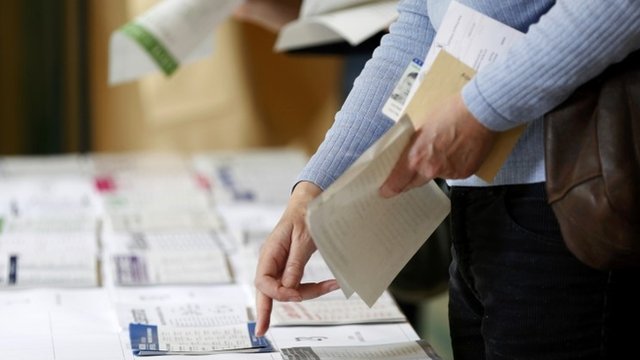 The UK’s party leaders are awaiting the results of elections to the European Parliament, the first nationwide test of electoral opinion for four years.

Voting took place on Thursday but results will not be announced until after polls close in other European Union member states at 22:00 BST.

A total of 73 MEPs will be elected from nine regions in England as well as Wales, Scotland and Northern Ireland.

The Conservatives topped the polls in the last European elections in 2009.

UKIP hasn’t really gone in for the expectation management other parties so often indulge in. Anything less than winning more seats than any other British party will be seen by UKIP’s critics as a failure”

Their leader Nigel Farage has said the polls are “tight” but has predicted that his party will cause a “political earthquake” by getting the most votes.

The party has been celebrating gains in Thursday’s council elections in England, which saw it add 161 councillors and led Mr Farage to predict it could get its first MPs elected next year.

Labour is hoping to do better than in 2009, when the party – which by that stage had been in power in Westminster for 12 years – suffered its worst post-war election defeat.

The Lib Dems, however, are preparing for a bad night. They won 11 seats in 2009, with some predictions they could be wiped out altogether. 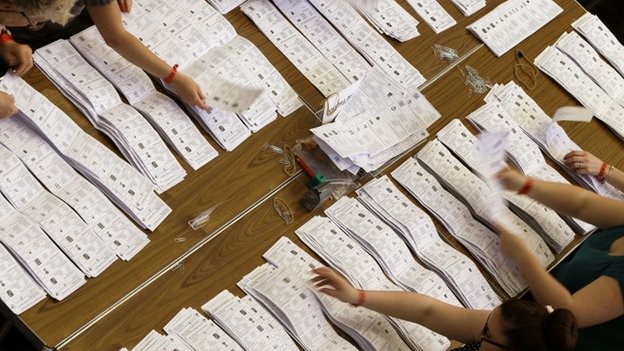 Ahead of Sunday’s results, senior figures in the party have dismissed calls for Nick Clegg to step down after 200 activists – including two general election candidates – signed a petition urging him to make way.

The Green Party of England and Wales has set itself a target of tripling its representation from two to six MEPs and of finishing ahead of the Lib Dems in fourth place.

The BNP won two seats in 2009 after getting 6.2% share of the vote but opinion polls have suggested their nationwide support has fallen sharply since then and they could struggle to retain these seats.

In total, 30 parties are contesting the European elections, including the SNP, Plaid Cymru, Sinn Fein, the Democratic Unionist Party and Ulster Unionist Party which all won seats in 2009.

Britain is one of eight countries to use a “closed list” system where people vote for a party, rather than an individual. 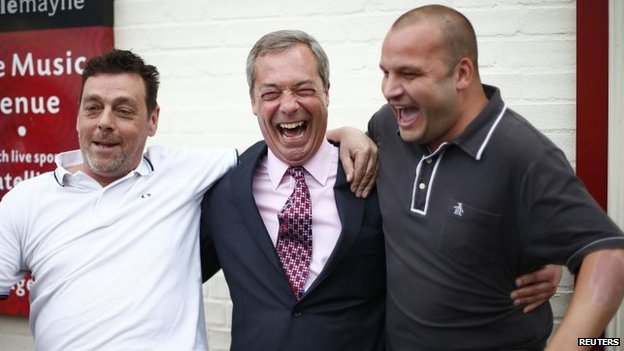 The parties – here is a guide to each of them – decide who goes on the candidate list for each of the electoral regions, with the ones at the top standing the best chance of being elected.

The way seats are allocated within each European constituency uses the D’hondt system, which is a form of proportional representation.

Across Europe as a whole, 751 MEPs will be elected to the European Parliament, in proportion to countries’ population size.

The powers of the parliament, which sits in both Brussels and Strasbourg, have expanded since the last election in 2009.

MEPs now negotiate legislation with national government ministers in what is called “co-decision”, before parliament votes on the laws.

They have a say on budget areas including agriculture and regional aid.