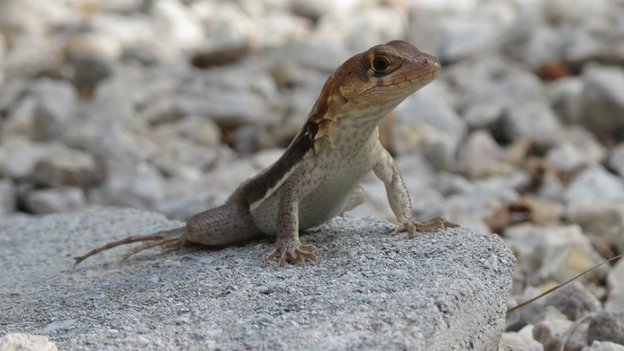 If you want to see the Giant Earwig of St Helena you may already be too late.

Fancy sniffing a pretty yellow Arlihau flower in the wild? You’ll have to hurry down to Pitcairn Island as there’s only six plants left.

The common thread linking these endangered species is that they are residents of UK Overseas Territories.

A new report from the RSPB says that 94% of unique British species lie beyond our immediate shores – and some of them urgently need protection.

The RSPB report concerns 14 relics of empire scattered from the South Pacific to the Mediterranean.

Prime Minister David Cameron has said that the Overseas Territories provide, “an important opportunity to set world standards in our stewardship of the extraordinary natural environments we have inherited”.

With the report showing that 85% of our critically endangered species live in these territories, the RSPB is asking for increased spending to meet the Prime Minister’s ambitions.

But there is no statutory protection for native creatures and intense pressure on their habitat as the tourist industry expands.

There are plans for a dolphinarium on the island of Grand Turk and proposals to build a freight shipping port, marina and cruise ship terminal on East Caicos. It’s one of the largest uninhabited islands in the Caribbean with some of the region’s best preserved coral reefs and turtle nesting beaches.

The head of the islands’ Department of Environment and Maritime Affairs, Kathleen Wood, fears that, “this kind of project cannot be done sensitively. You would have to dredge through an incredible amount of reef”.

Turks and Caicos premier Rufus Ewing is more enthusiastic, accepting that some of the pristine environment will be damaged. He told BBC Radio Four’s Costing the Earth programme: “There are some things that sometimes we may have to sacrifice. It is an area we can use to boost our economy, to boost our development. “

Other risks to the species of Turks and Caicos come from further afield. Endangered Queen Conch and Spiny Lobster are taken by scuba-diving poachers whilst the scrub forests are being ravaged by fires burnt by illegal immigrants from Haiti. Mature trees are felled and burnt to make charcoal for their cooking stoves.

Should Britain be doing more to protect the environment of Turks and Caicos and the other territories as the RSPB is demanding? Foreign Office minister, Mark Simmonds says that the UK funds specific conservation projects and helps train local staff but ultimately, “it is the responsibility of the territory governments to deliver environment protection and the maintenance of their bio-diversity”.

But back in Turks and Caicos, Ethlyn Gibbs-Williams of the local National Trust would like the UK to flex its muscles. The local emphasis on economic development needs to be tempered, she says, “we would like to see more support from the British government ensuring that we have strong environmental laws”.

Costing the Earth reports from the Turks and Caicos Islands on BBC Radio Four at 3.30pm on Tuesday 20th May.